This is a bit delayed as I posted these a few weeks back on the SFF Forum (sorry about that), I present to you the latest LZ7 case design (work in progress): 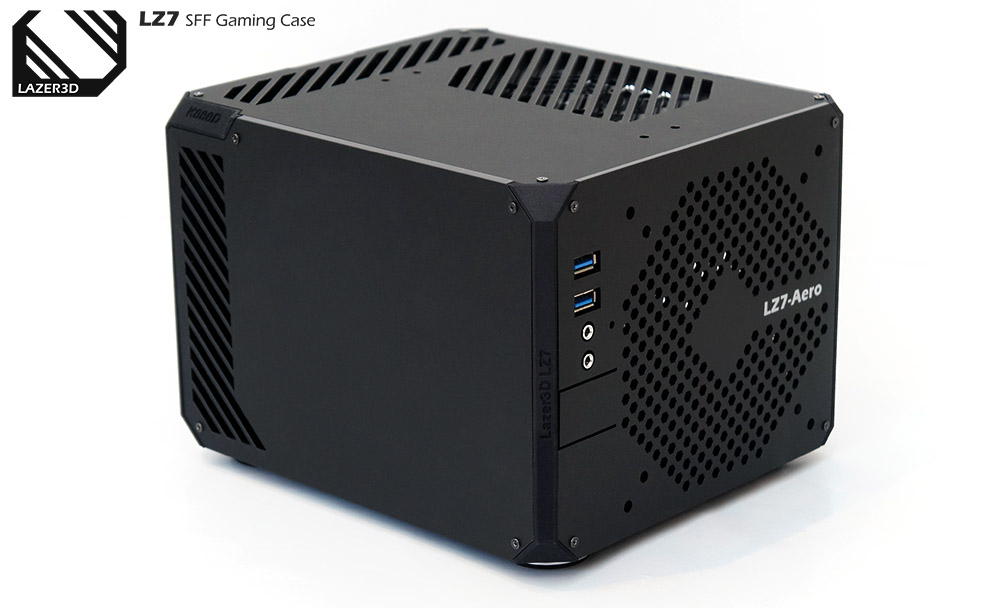 One of the biggest pieces of feedback I received from the First Edition was the request for matte side and rear panels instead of the polished smoked transparent panels originally supplied. The original side panel does not have much of the panel surface itself exposed, most people opted for dust filters and the Full IO panel which takes up most of the panel. This got me thinking, the best way to show off matte panels would be to simplify their design and use integrated vents instead of dust filters or fan guards.

Some people will still prefer to go the dust filter or fan guard route, that option should still be available to pick from. These new designs are intended as alternative panel designs that you can choose from to customise the case to your own preference and setup.

The first new design is what I have called the ‘Aero’ vent, this is a series of hex holes giving a really nice aesthetic especially when combined with the matte black and laser etched white text: 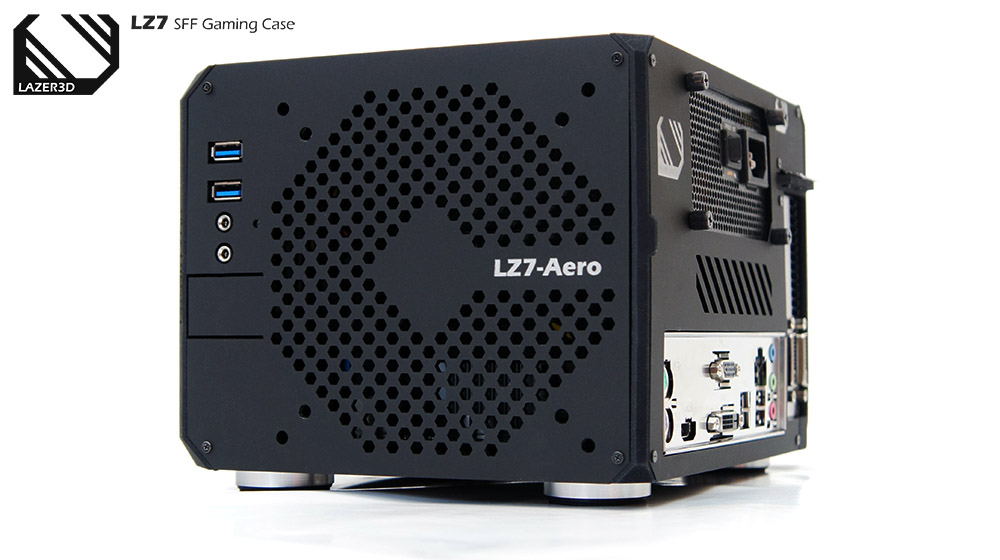 The second new vent design is what I have called the ‘Cyclone’ vent. Although the design of this vent is not to everyone’s taste, it has a very functional purpose to reduce fan noise and maximise airflow as close to a fan guard as possible: 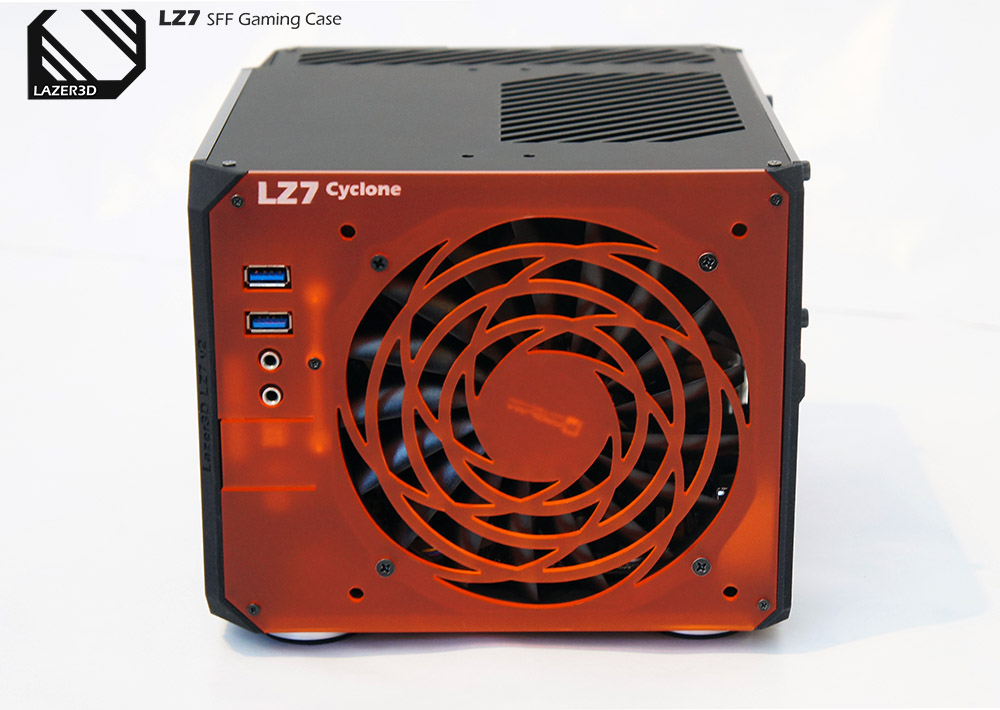 Before I get started with all the photos, I did some testing on how each vent type performs in terms of airflow and noise. There is a significant difference between them, it is worth noting that the Wind Speed Meter cannot read below 1.4km/h, this is why some configurations show an airflow reading of zero even though some air could still be felt blowing out of the fan.

The noise and airflow were measured at a distance of 5cm from the fan with the fan set to 80% power, here are the results: 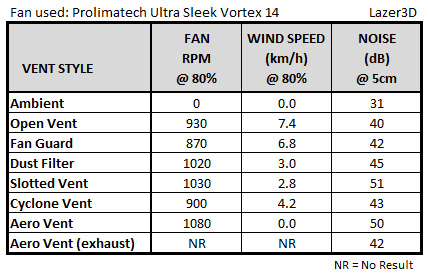 Diagonal slots were the loudest vent design closely followed by the Aero Vent pattern. The fan guard, dust filter and the Cyclone vents were the quietest with similar results not much above what was measured in an open vent configuration. In terms of airflow the Aero vents performed the worst resulting in a only a light breeze of air that the meter could not detect. The fan guard performed the best giving the most airflow by quite a margin, the Cyclone vents put in a good performance with strong airflow also.

You may prefer the look of the Aero vents, but if you are looking for maximum performance with a high end CPU then you would be better off with an open panel and fan guard or the Cyclone vents. If however you are set on the Aero vents then I would advise you reverse the fan and use the Aero panel in an exhaust setup, this greatly reduced the noise levels, but you will likely see slightly higher system and CPU temps in this arrangement.

Back onto the photos, first up here are some more angles of the standard black case with matte black side and rear panels: 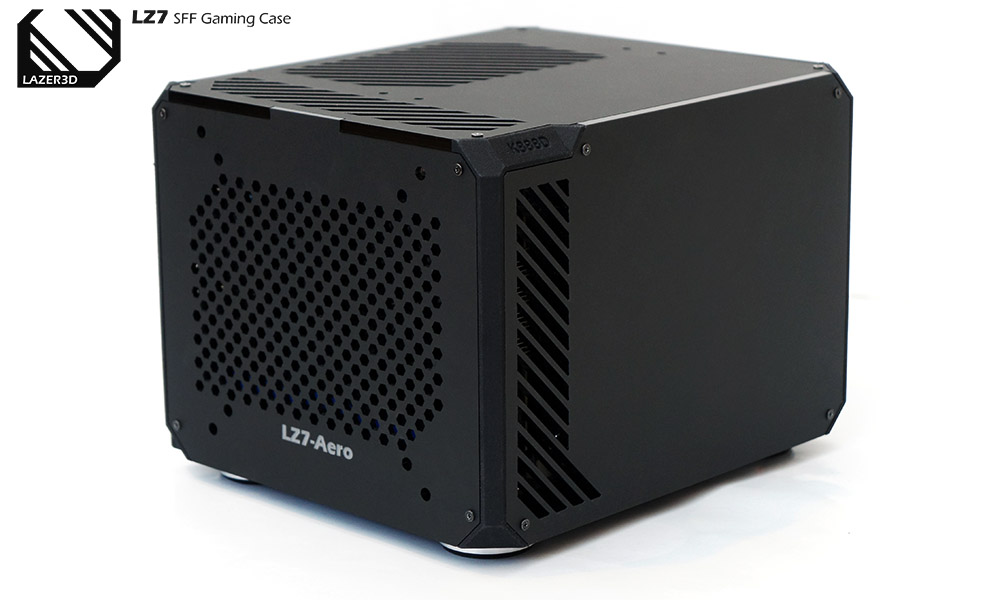 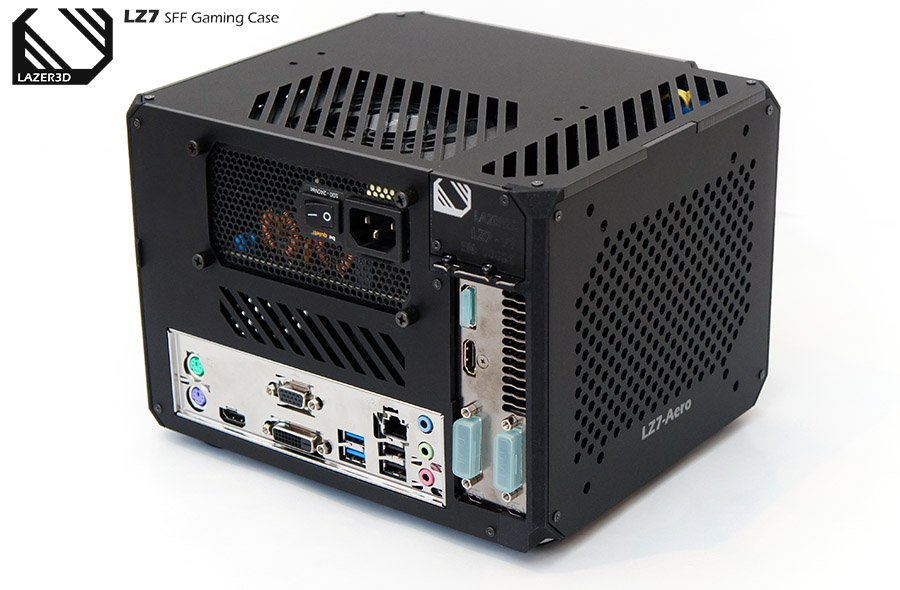 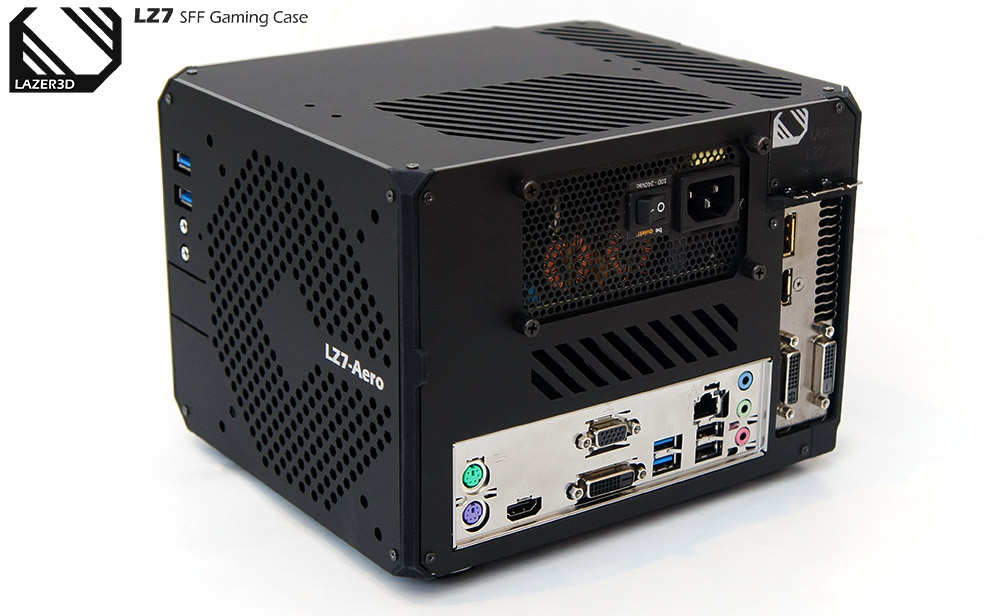 As I was getting multiple side panel vent designs made for testing, I wanted to use it as an opportunity to explore some alternative colours for the panels themselves. There are a range of ‘frosted’ acrylic materials available with matte a surface finish, the downside is that they are translucent, whether this is a negative is personal preference I guess. These panels feel really nice, they have a very premium feel to them.

Remember, any vent design can be used with any panel colour if you don’t like the Cyclone vent design. First up is Mandarin Orange side panels, shown on a black LZ7 with black corner joints: 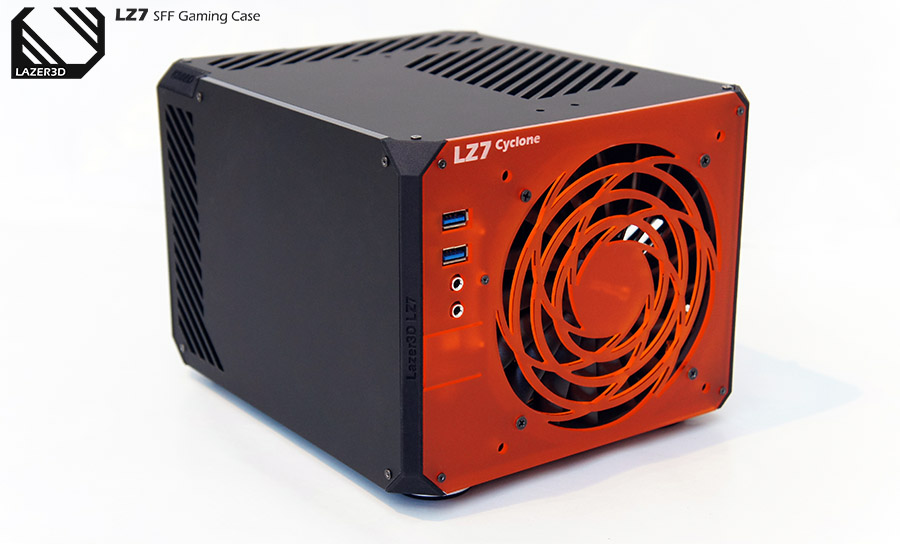 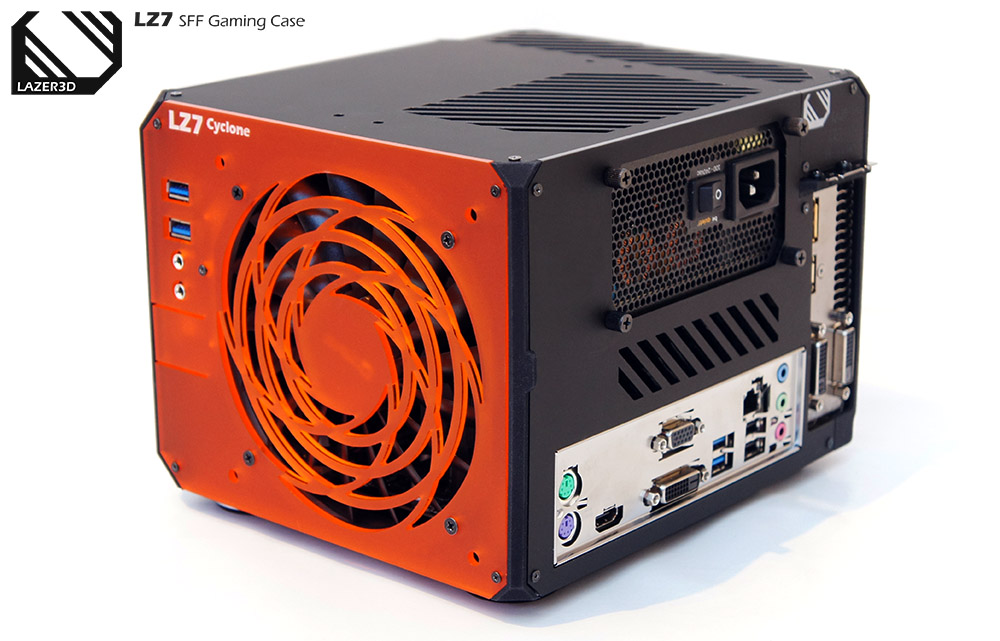 Here is the case powered on, you can see the Power and blinking HDD activity light shining through the panel: 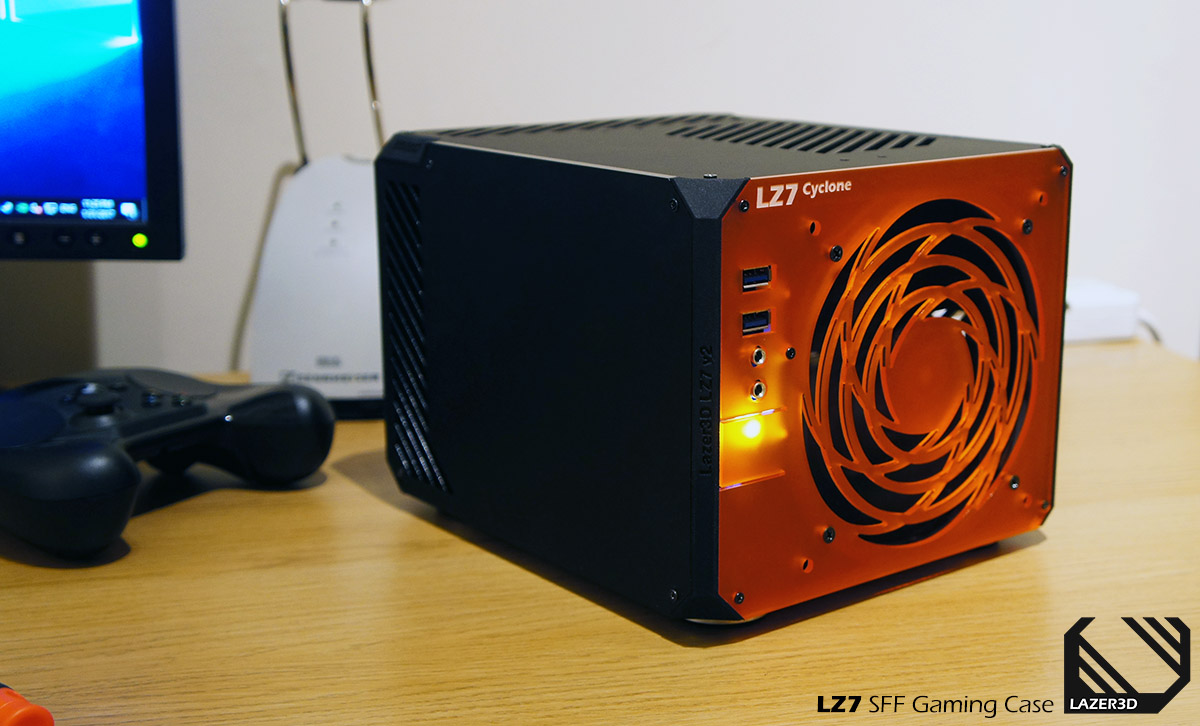 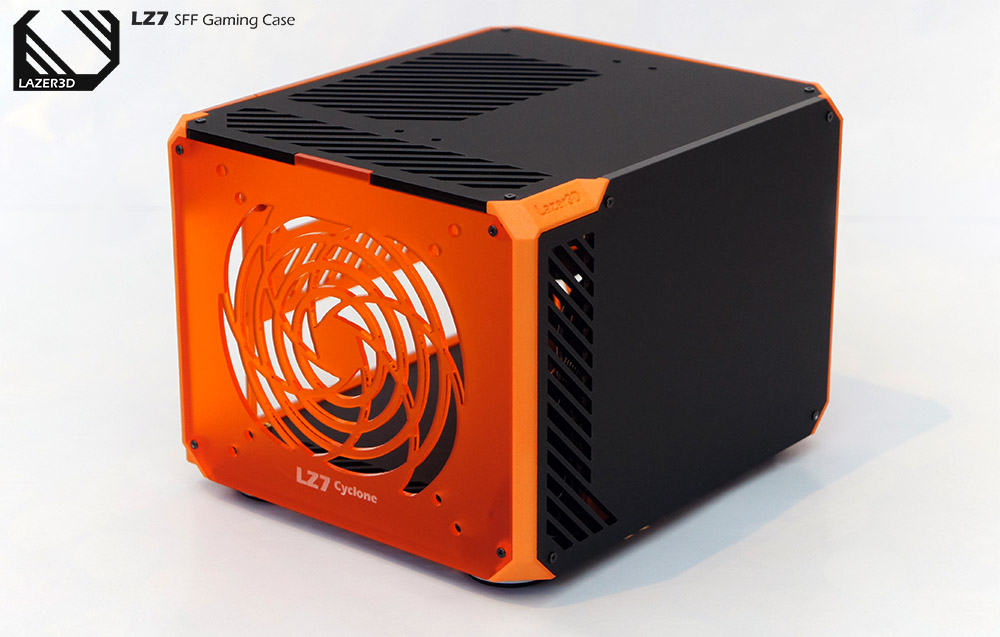 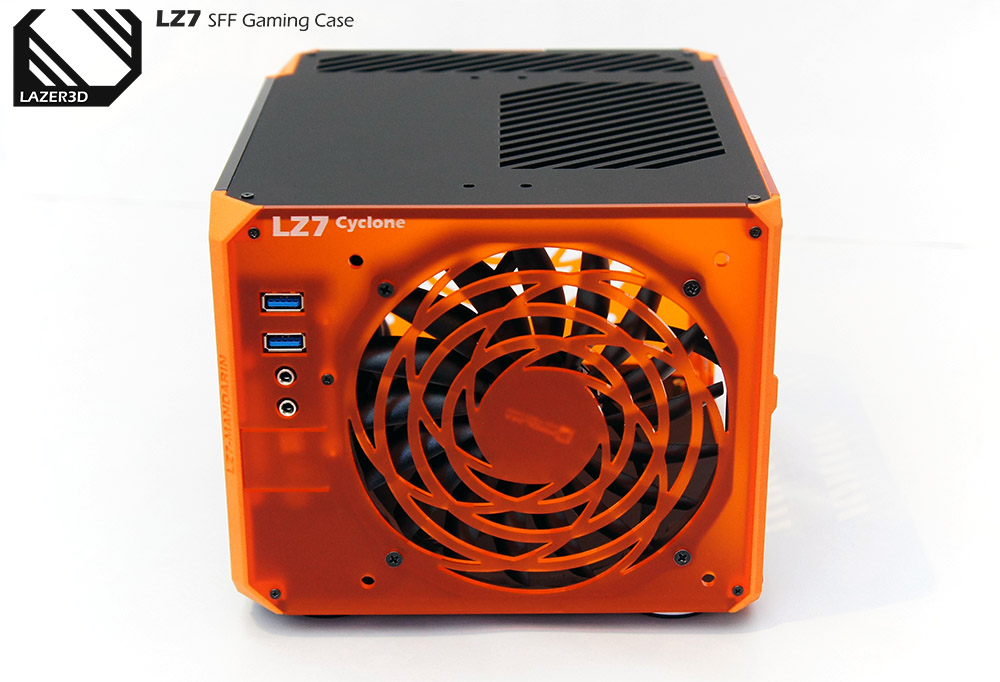 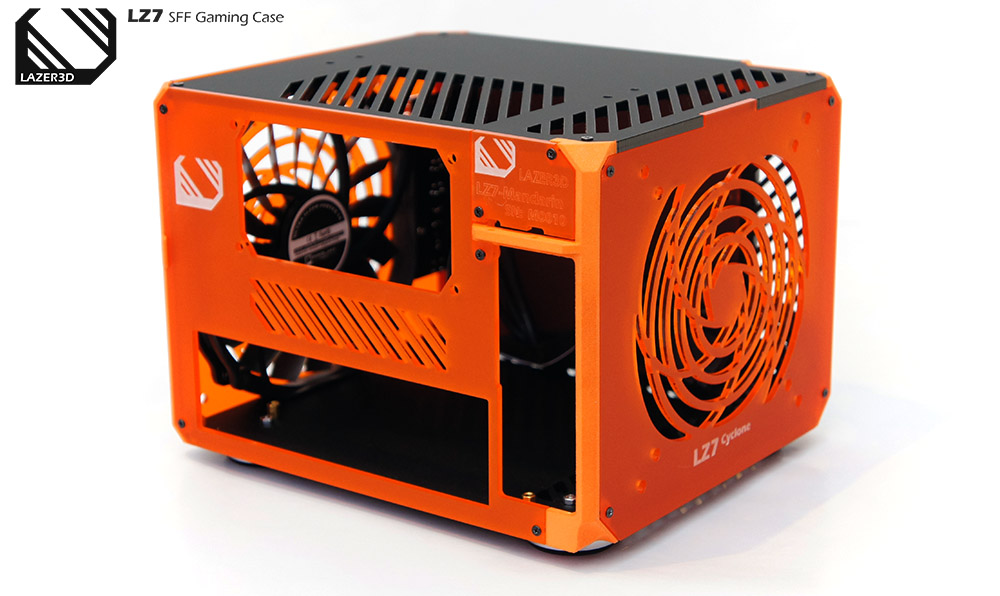 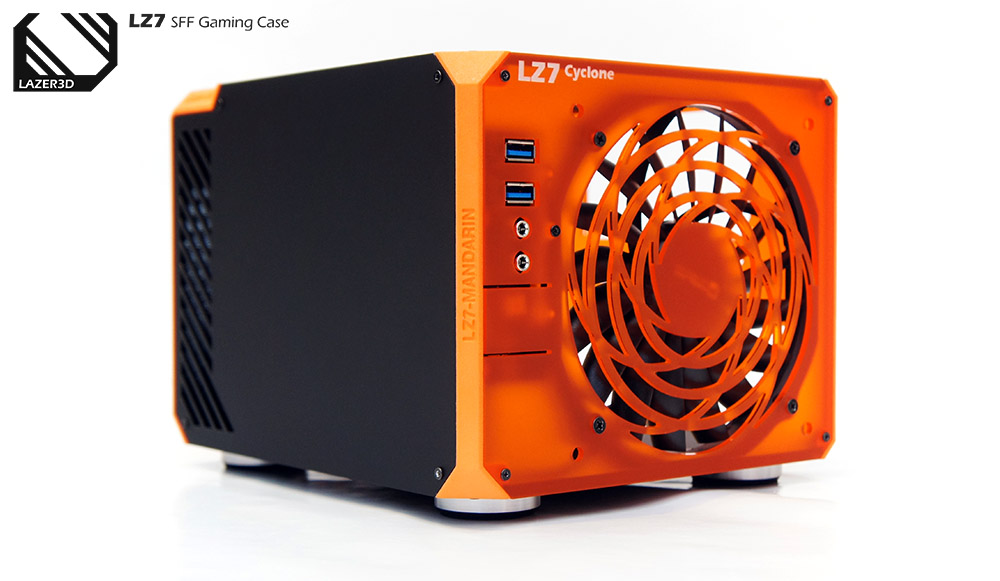 Next up are the Azure blue panels with an open vent and fan guard, shown here on a black LZ7 with black corners. The Blue was not as vivid as I was expecting, its more of a faded toned down blue, but I actually quite like it: 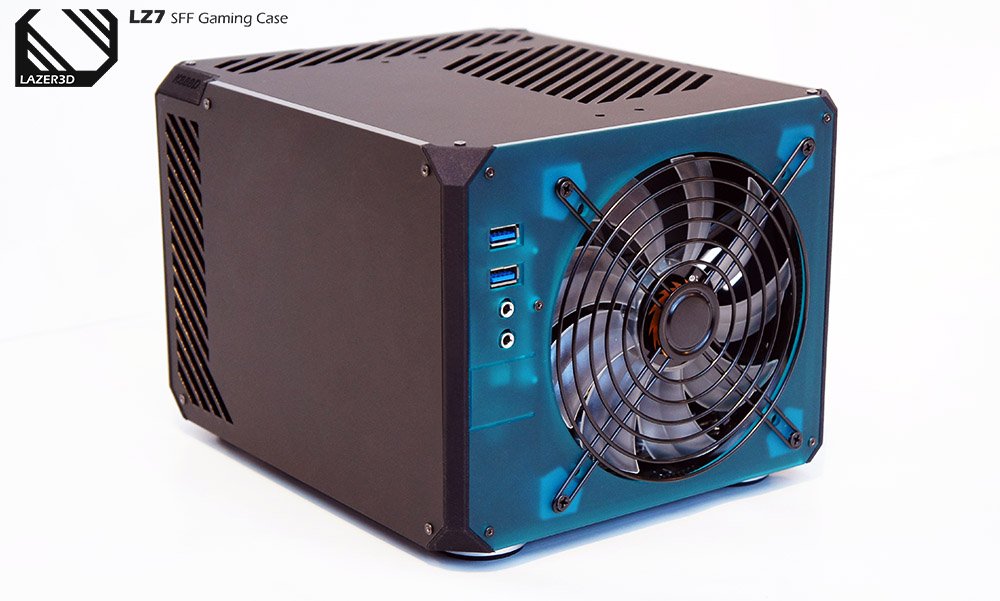 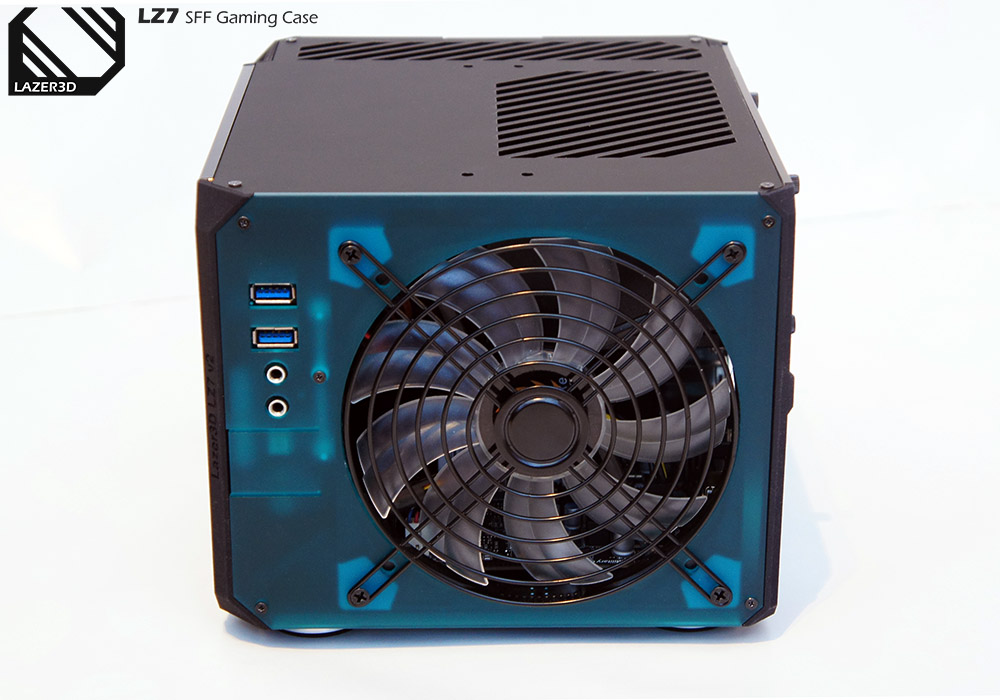 Finally, here is what the Azure blue panels look like on a White LZ7 with blue corners, the Power LED lights up nicely through the side panel which looks especially good with this Blue LED fan: 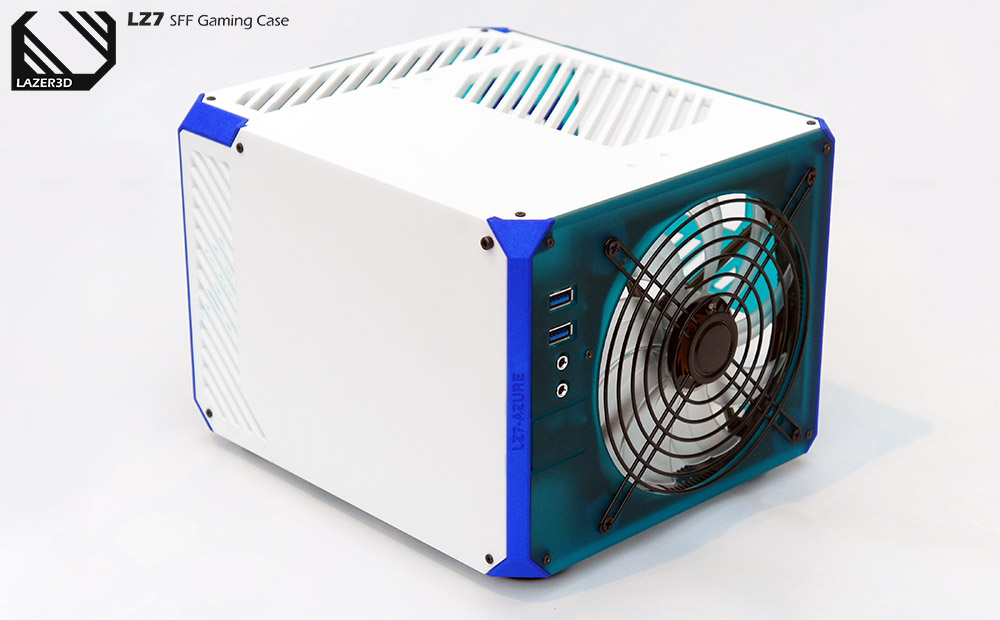 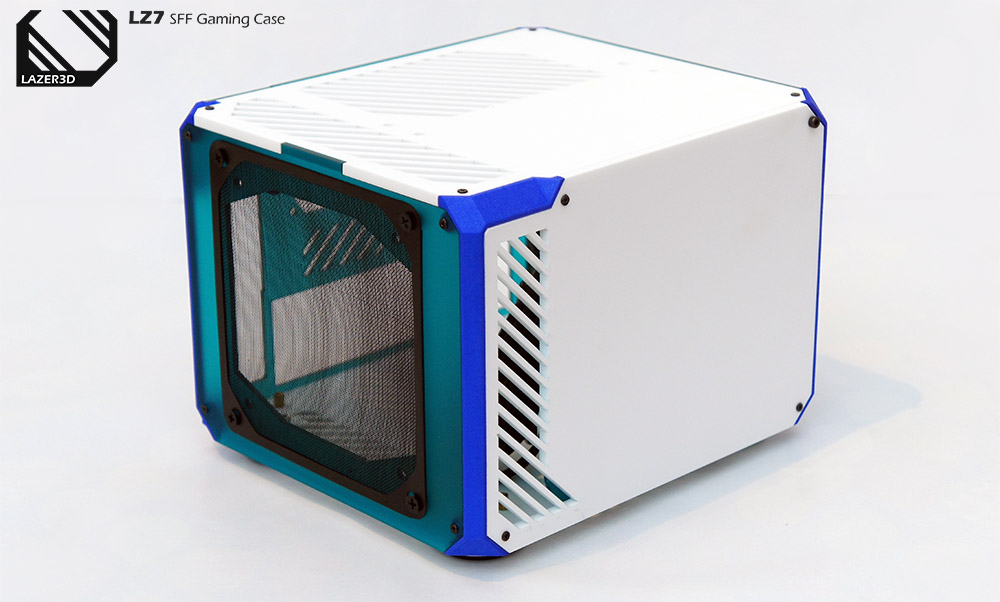 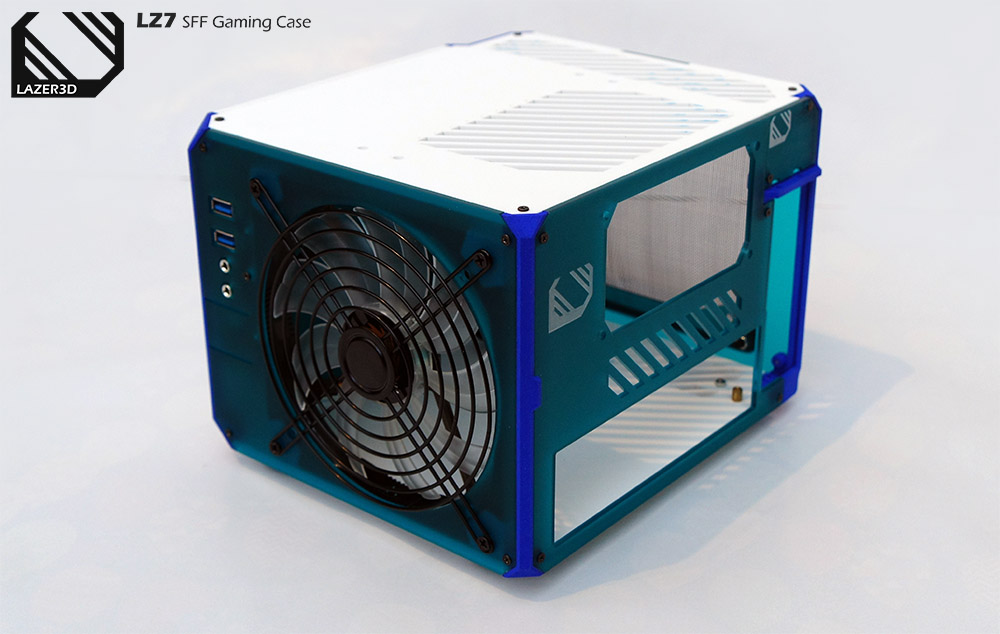 Last thing to add is that I will shortly be testing out some alternative button styles such as these below: 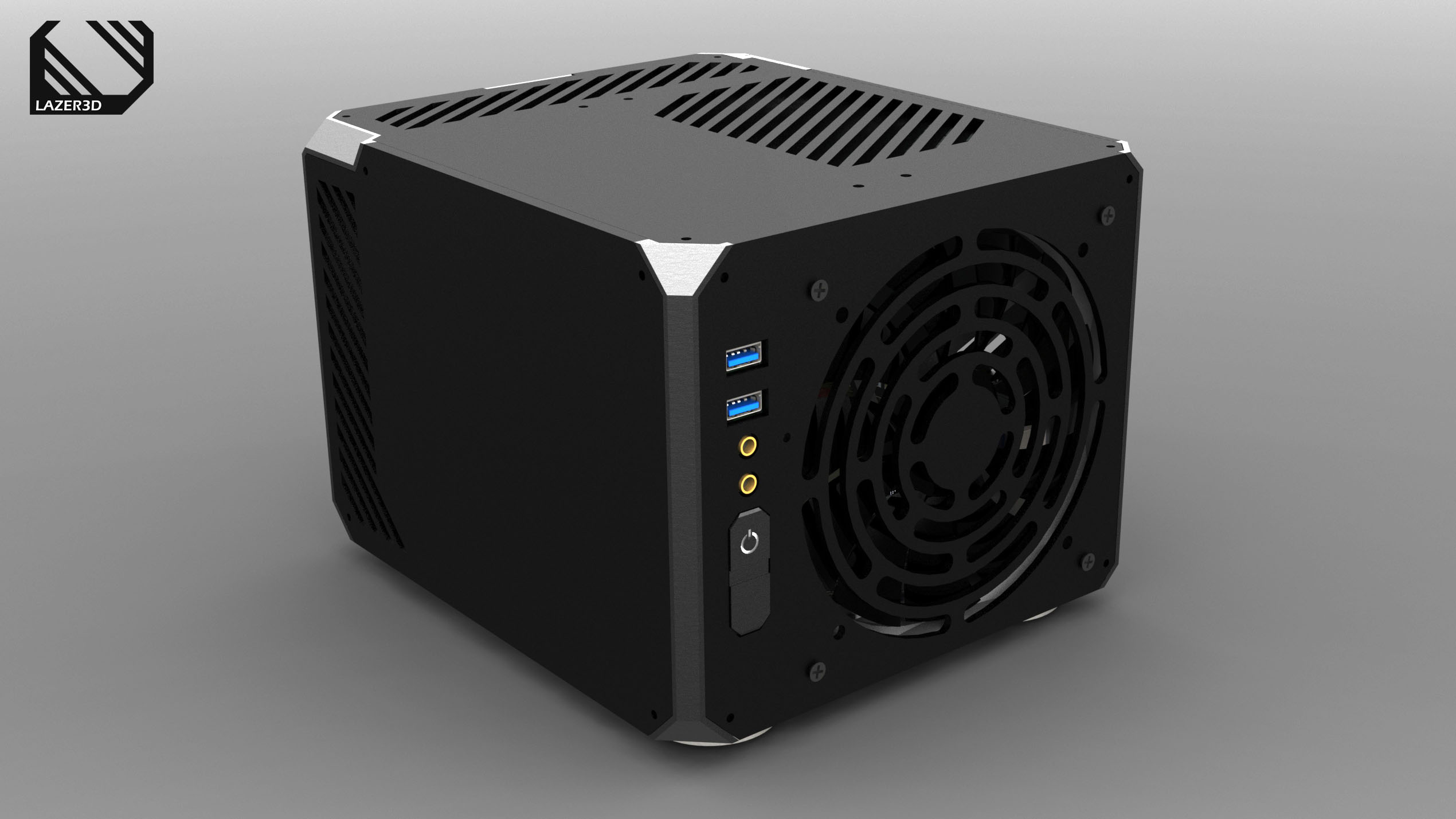 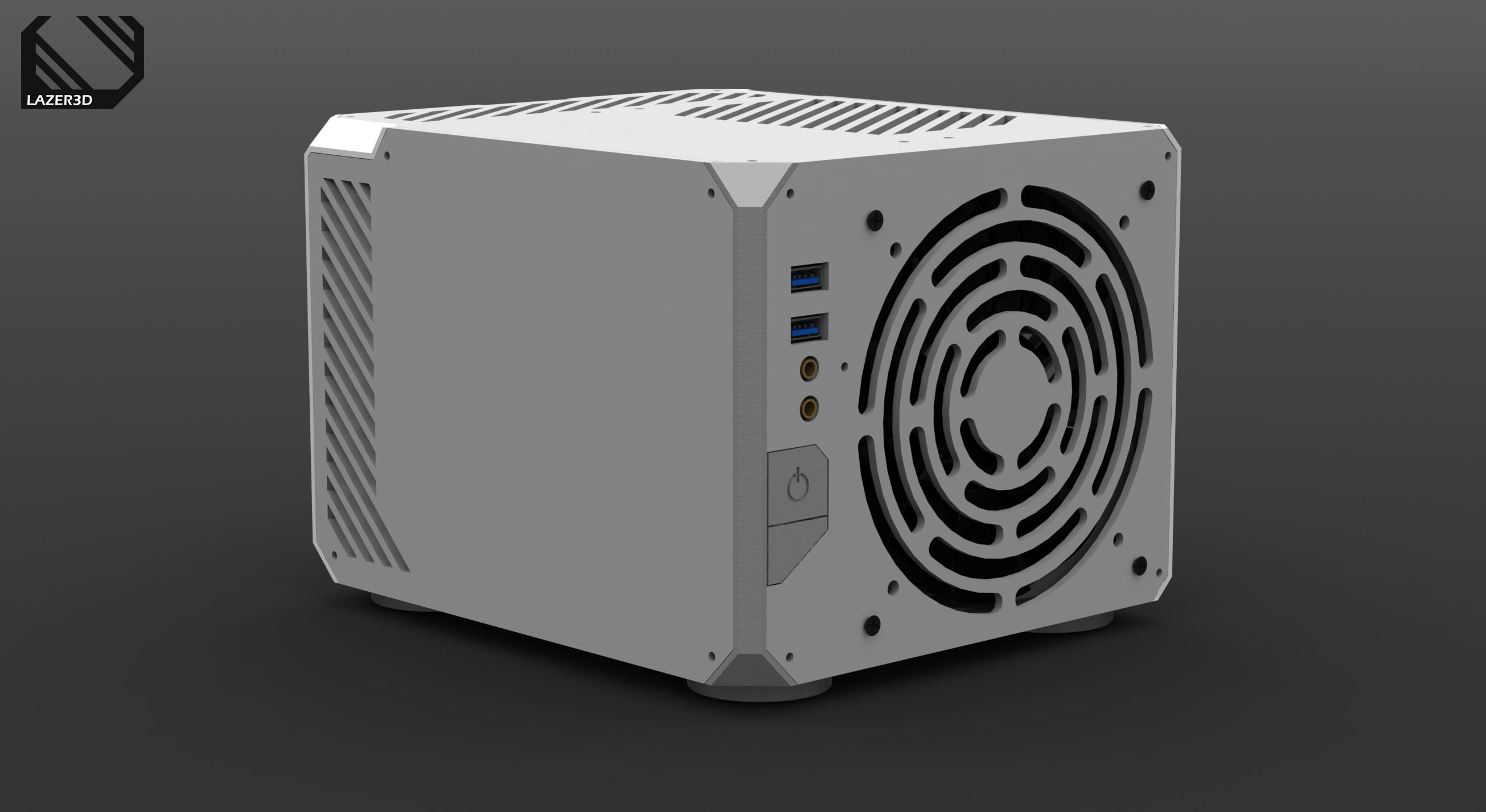 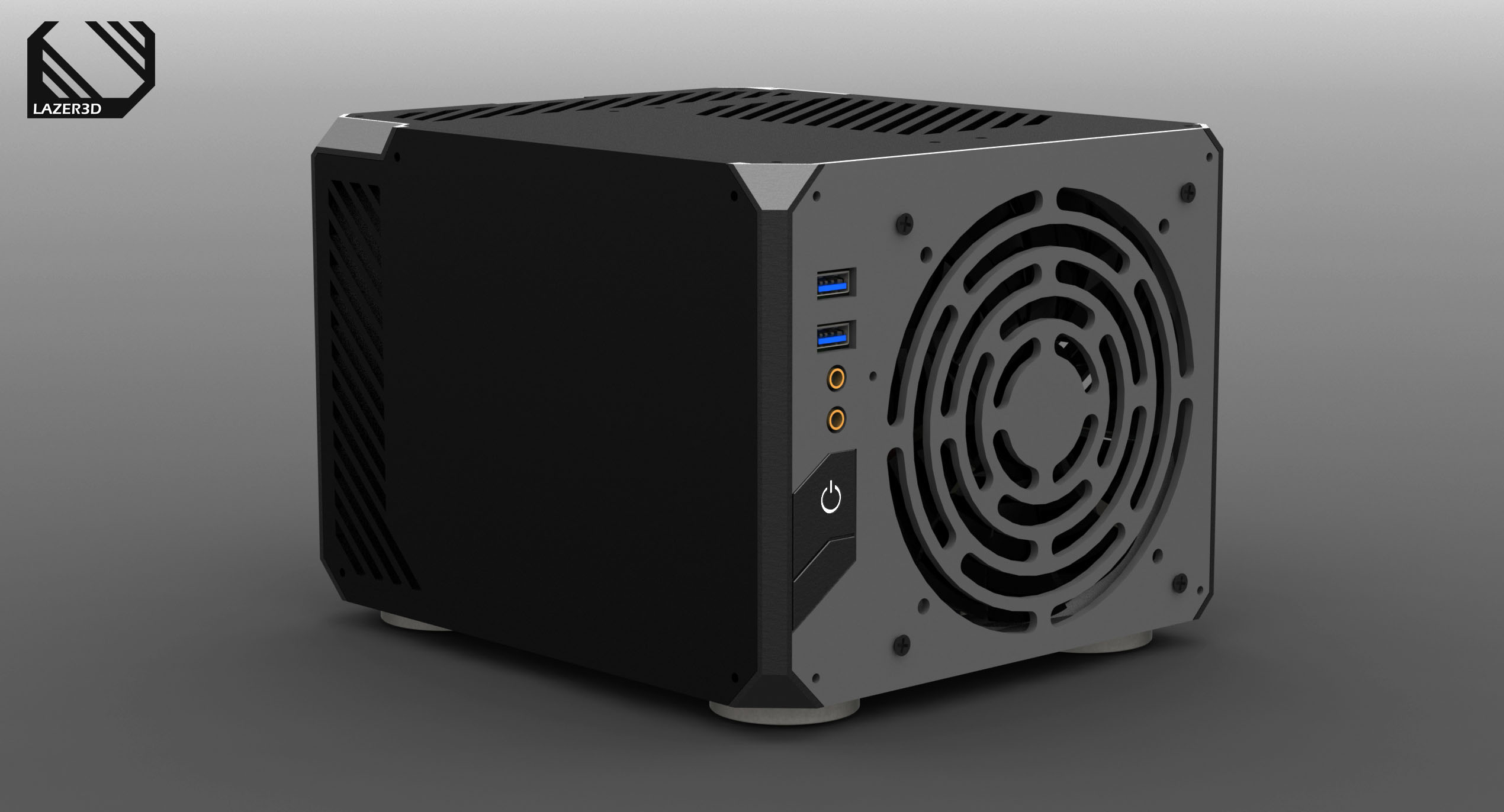