Disclaimer: The Cryorig C7 cooler was sent by the Cryorig team by request.
The Noctua fans and coolers mentioned in this review were also sent by Noctua per our request. The Noctua NH-L9i cooler performance in this case will be reviewed in a few weeks.

In this review I’ll be using the Cryorig C7 CPU cooler alongside a couple of Noctua’s NF-A9x14 fans to investigate the thermal aspects of the CG7 Cravo PC Case. For this test I’ll look into CPU intensive workloads as this is one of the main focus of this case. The case layout used for this test was the default layout with TFX psu.

My measures were made with an ambient thermometer and HWinfo, with data collected every 10 sec for system info and 10 min for ambient temperatures.

For this review and future reviews, I’ll consider the horizontal position to be the default orientation of this case. So, when I say top panel it’s the panel with the venting holes on top of the CPU, and side fan bracket is the bracket for the 2x92mm fans and so on. 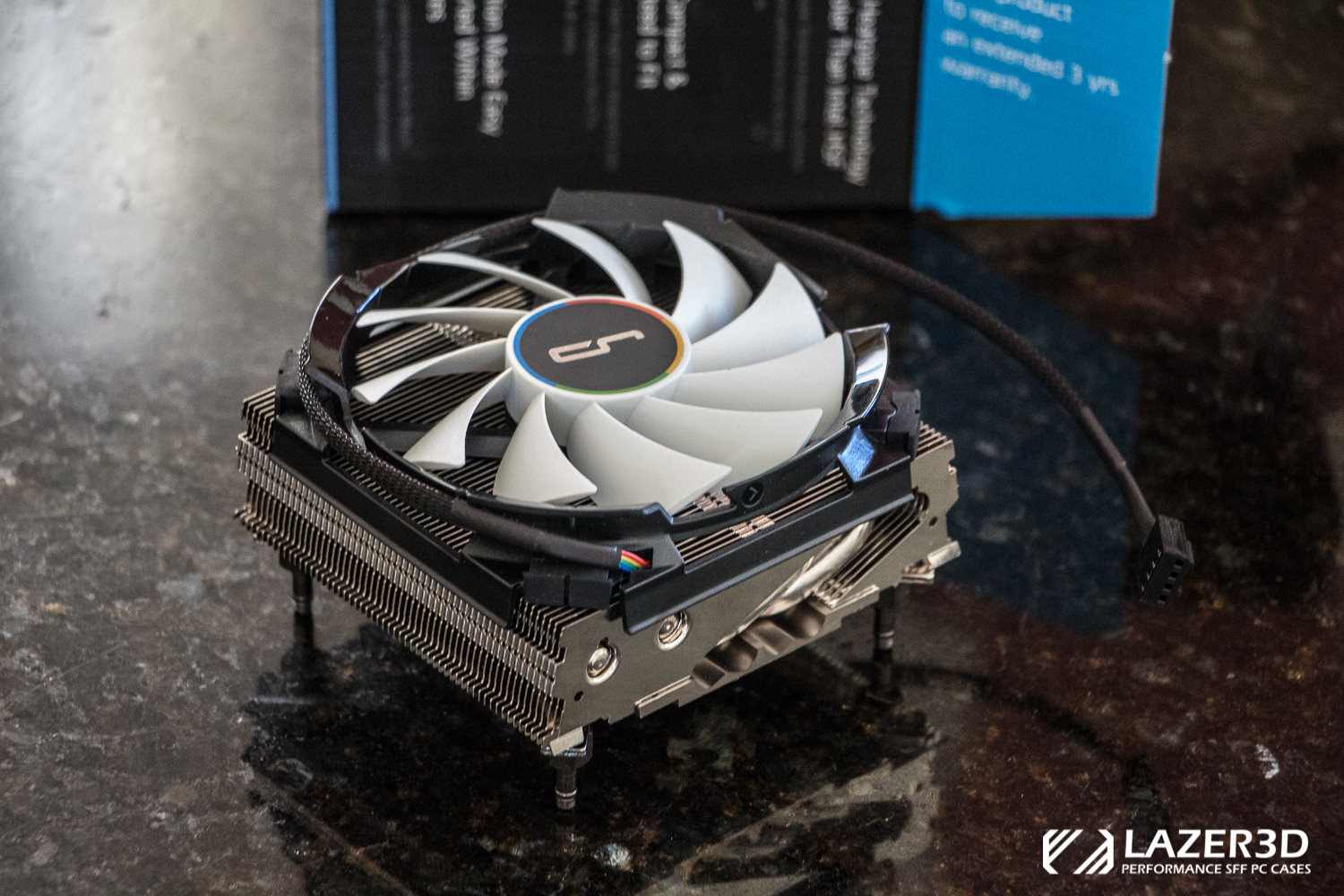 the C7 is a very popular cooler among the SFF community so I was really interested to see how it would perform in this case. It came with a nice little tool to help with assembly and a plastic backplate, making installation a very easy process, much better than some past experience I had with cheaper coolers with similar mounting solutions. It has the same height as the intel stock cooler at 47mm tall, with 4x 6mm heatpipes and a copper baseplate.  Its rated at 100w tdp and its very well built. 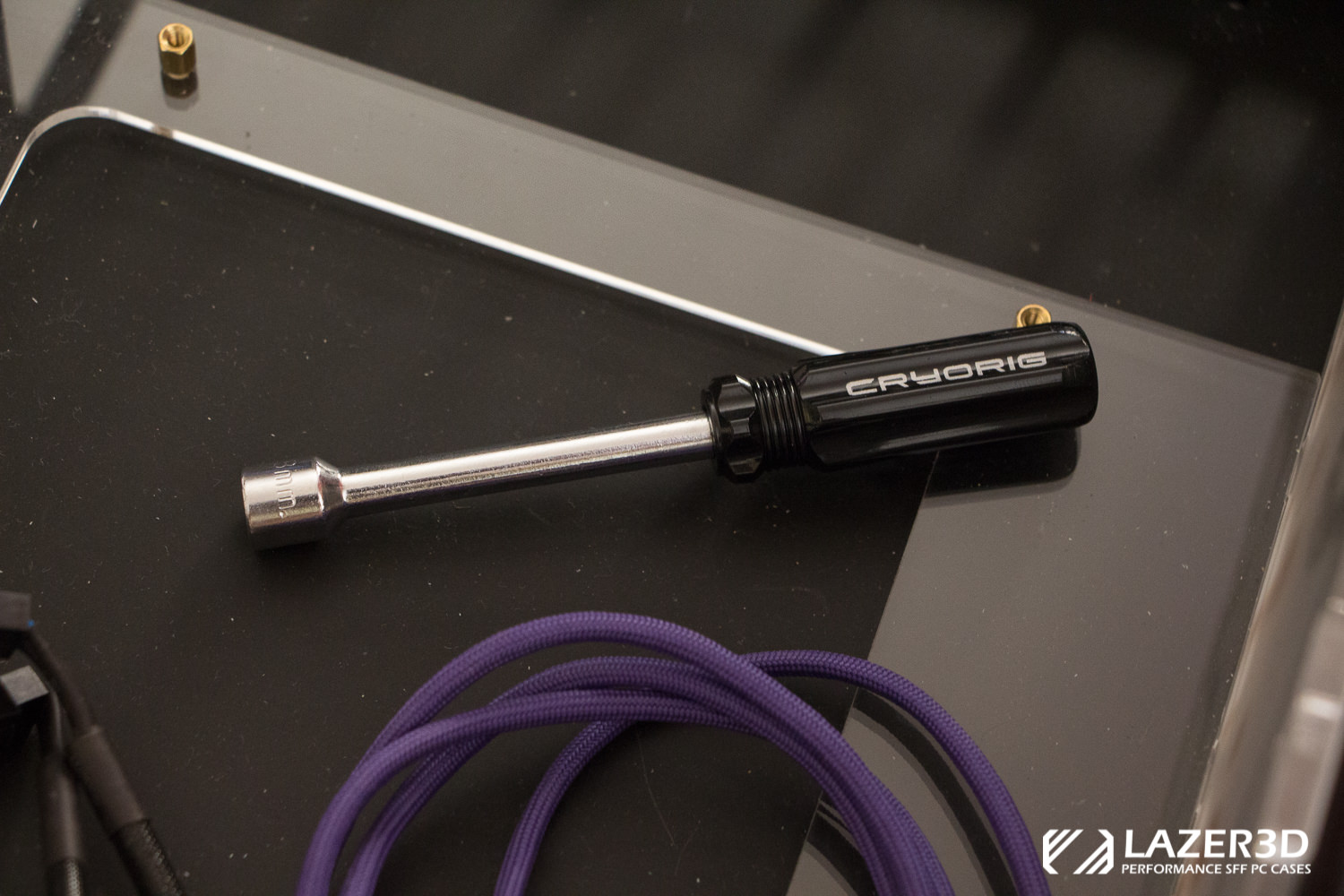 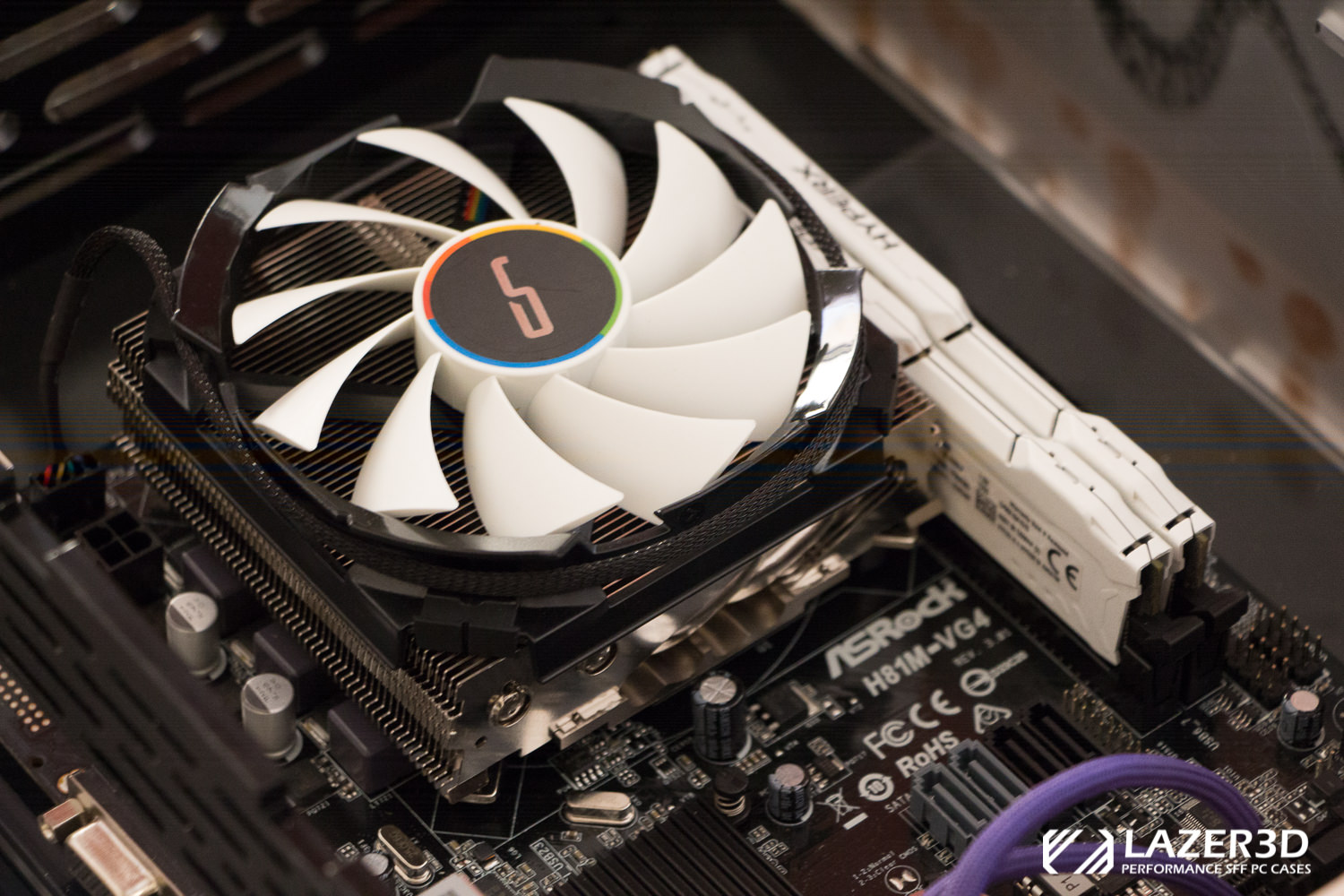 My first attempt was with the 2 Noctua fans on the side bracket set to intake. After some testing I got into 80ºC+ temps which could range from 50 to 55 delta T , and over that temperature this motherboard just sets all fans to 100% making everything very noisy. At max speed the temperatures improved a bit. I flipped the case fans to exhaust and got much better results with the silent profile and decided to revisit the intake results on a cooler day, since my room temperatures range from 24ºC on cold days to 30ºC on very hot days. At max speed this were the results: 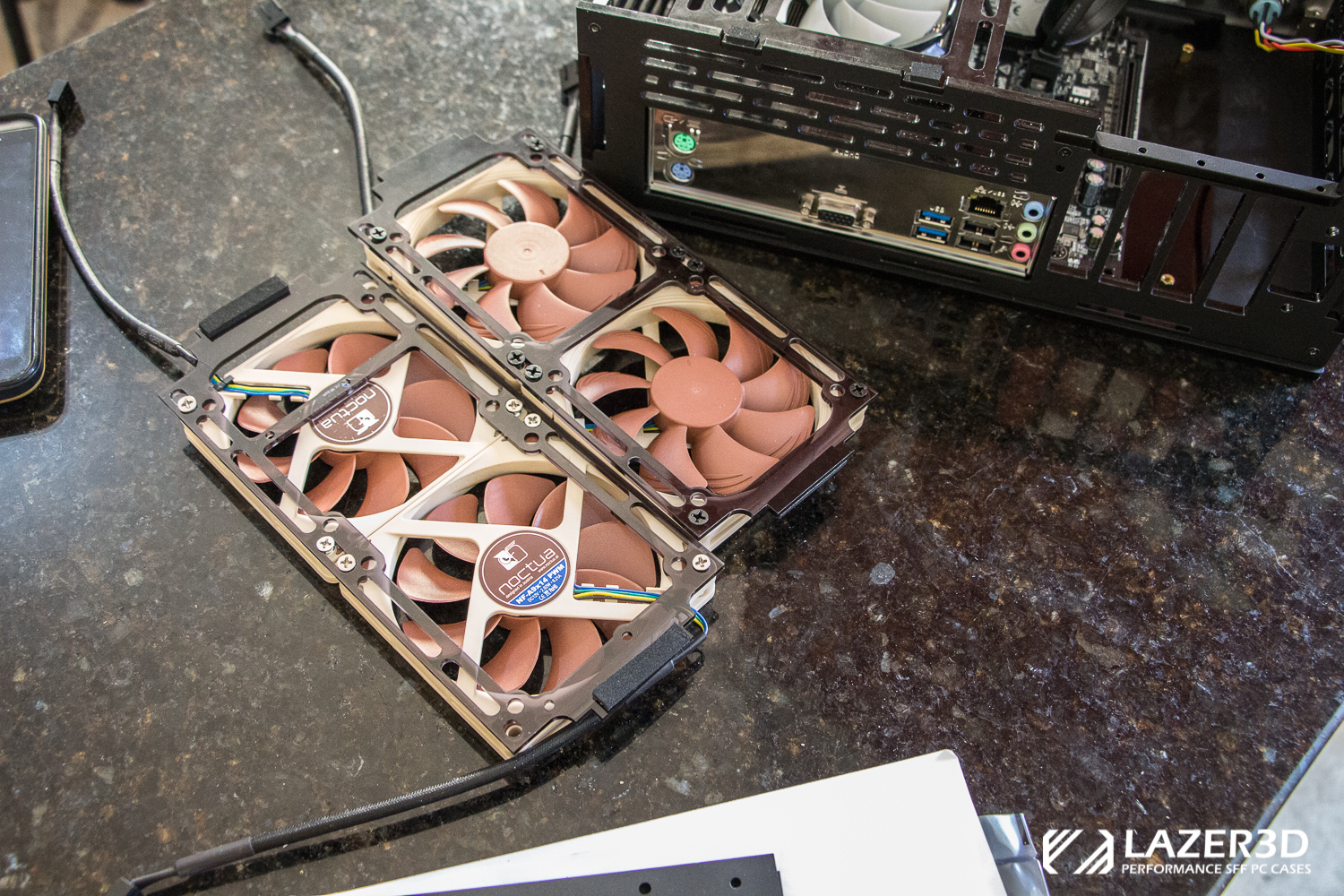 I decided to test the case with the vents on top panel blocked to test how it would impact temperatures. It’s interesting to see the blocked vents performing a little better with the fans set to intake. The Noctua NH-L9i behaves a little differently, and I’ll be analyzing that on a future post.

I used the Blender BMW scene initially, which is a 10 minute render on this processor. This reflects a lot of my personal workflow and is a good measure of how this case handle 100% load on all cores for a short period of time. I used this short burst test to measure how vents, fan orientation and fan speed affected the CPU temperatures on this particular case.

For a more demanding test I used the Blender classroom scene, averaging around 35 minutes on the same 100% load, on the best configuration in silent fan mode. This test was used to see if the temperatures I was getting on the BMW scene were realistic or if the temperatures kept going up for longer periods of stress. turns out after 20 min the temperatures are very stable, only fluctuating by the normal amount.

Also, in these tests the boost clock never diped under 3.8Ghz. Average core voltage was 1.022V and Total CPU Package Power was around 65w to 69w. temperatures in these graphs are the delta over ambient temperatures. 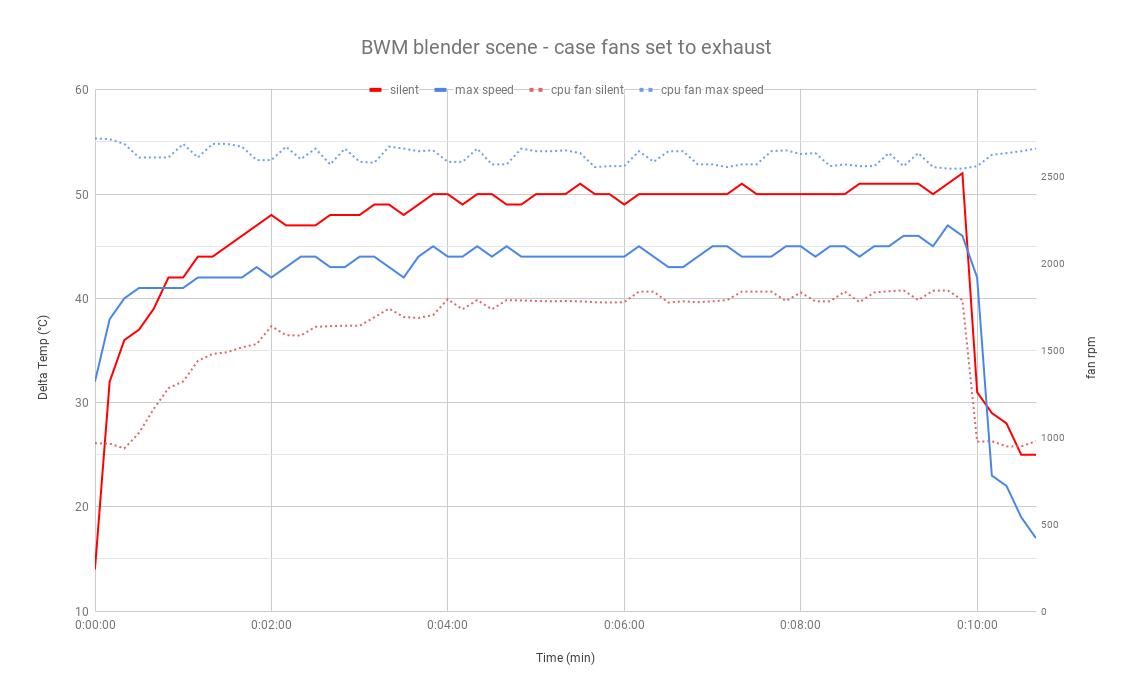 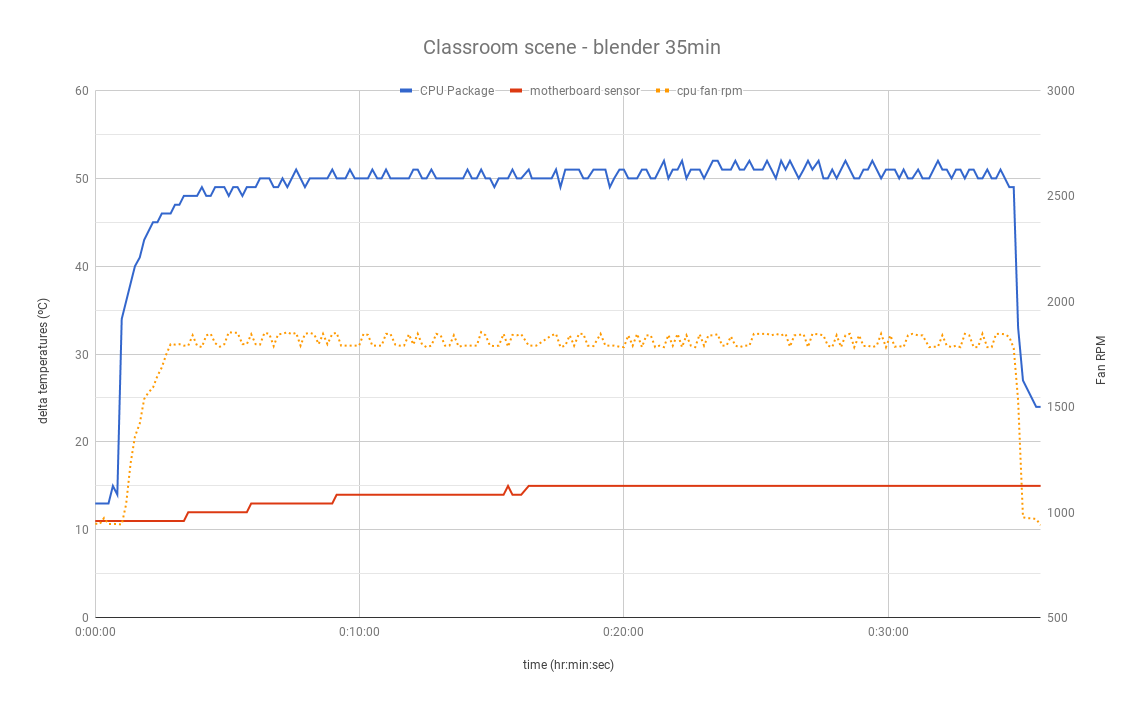 In the classroom scene the red line represents the motherboard temp sensor. I used this to see if the air inside the case would get warm over time.

Since I’m still not able to test game results (my GT 1030 is on its way) I decided to simulate the load of recent games, that are starting to focus on 6 core loads. That put this CPU into 75% load territory and that’s a reasonable load for any demanding multi-threaded application that would keep you in a short range of your case, as opposed to a render workload, where at 100% load and with an hour of wait, extra noise from higher fan rpm will not matter that much. 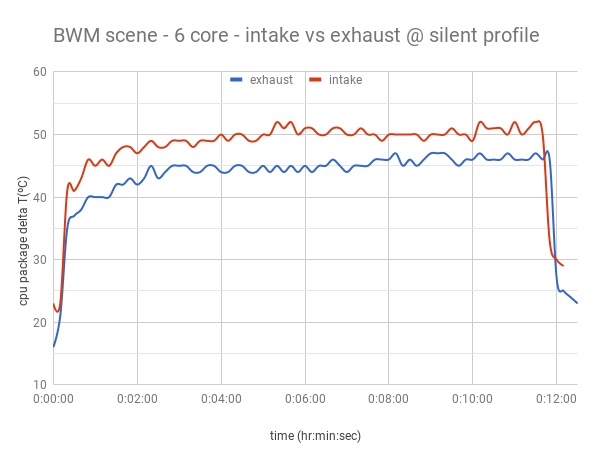 For this test, I used the same BMW blender scene but limited to 6 cores. What would matter here is the result for the silent profile in which the exhaust fan orientation has 5ºC lead from the intake counterpart. At max fan speed the difference from intake to exhaust for this load is around 10ºC. 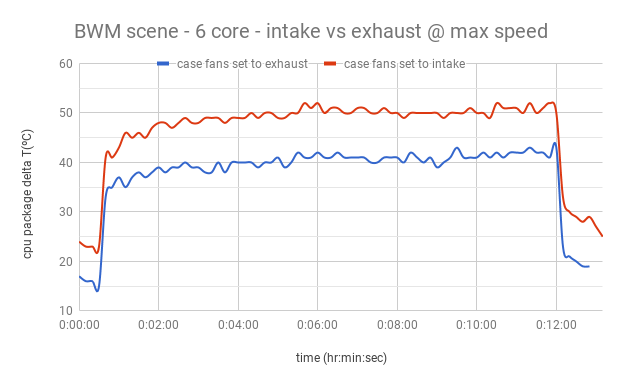 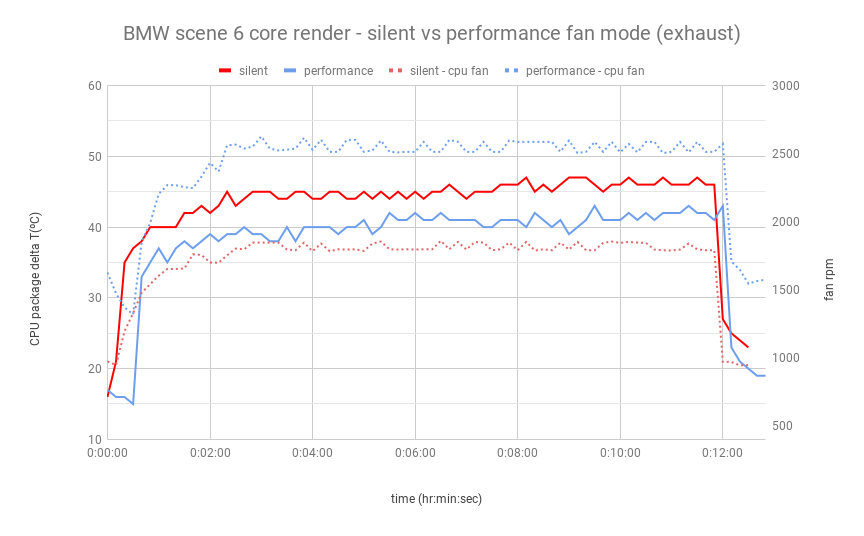 I’m very impressed by how these fans can be inaudible at idle and moderate loads. After changing the fan settings I realized that it’s better to have the case fans set to silence at all times, as that improves on the overall noise by a large margin on idle without sacrificing temperature. I could even lower the case fan’s RPM to be around 1000 rpm at all times with almost no impact, so this is something I’d recommend doing.

The Cryorig C7 cooler is very well made and good looking cooler. Its overall a great product for the price and the installation process was very easy and straight forward. I really like how the fan shroud helps with cable management, and its details in both product and packaging show care for aesthetics in general and I appreciate that.

I really liked the temperature results, overall. It’s close to what I expected and even better. I guess I only expected better results with the case fans set to intake, but I think that if GPU temperature is your most concern, removing the i/o shield would be enough to lower the CPU temperatures by a bit when case fans are set to intake. If no GPU is present or is something that is passively cooled, the case fans should be set to exhaust.

The temperature results where the case fans is set to intake and the vents are blocked made me believe that with some coolers it would be OK to have a clear panel without vent holes as an extra option, rather than just a tinted panel, as I believe the temperatures are higher because of the lack of pressure inside the case.

I also believe that a single NF A9x14 fan on the side panel could handle most setups if you need to cut some corners ($), as I’ve seen worst setups performing reasonably well and these fans are really optimized for pressure. Overall, very impressed by these fans, I can definitely recommend.

I believe this results should give you all an idea of how this case would performs with your system.

You can find more info about the Cryorig C7 here, and about the Noctua fans here