Over the next few weeks I will be testing a range of CPU coolers that can fit into the LZ7 case, with a clearance of up to 60mm there are quite a few different coolers on the market to pick from.

As can be seen in the above photo, the coolers I currently have to hand and will be testing are:

I would also like to try and get a hold a Cryorig C7, allot of people regard this as the best low profile cooler.

The end goal is to see what coolers work best so when you come to build a system into LZ7 you will have a good idea of what type of cooling setup works well.

I thought I’d go straight in with the biggest cooler, the Scythe Big Shuriken 2 Rev.B. Its the most expensive of the bunch costing around £40 in the UK, it comes in at 58mm tall and includes a whopping 10 heatpipes and a 120mm slim PWM fan.

It was fairly straight forward to fit, on par with other similar height coolers such as the AR-06. There were no compatibility issues with the motherboard, despite the size of the heat sink covering most the motherboard it cleared the low profile RAM (Corsair Vengeance LPX) and all other motherboard components, it could also be fit in any orientation without issue which is great for planning airflow. Here it is fitted into the LZ7 on the Gigabyte B150N-Pheonix: 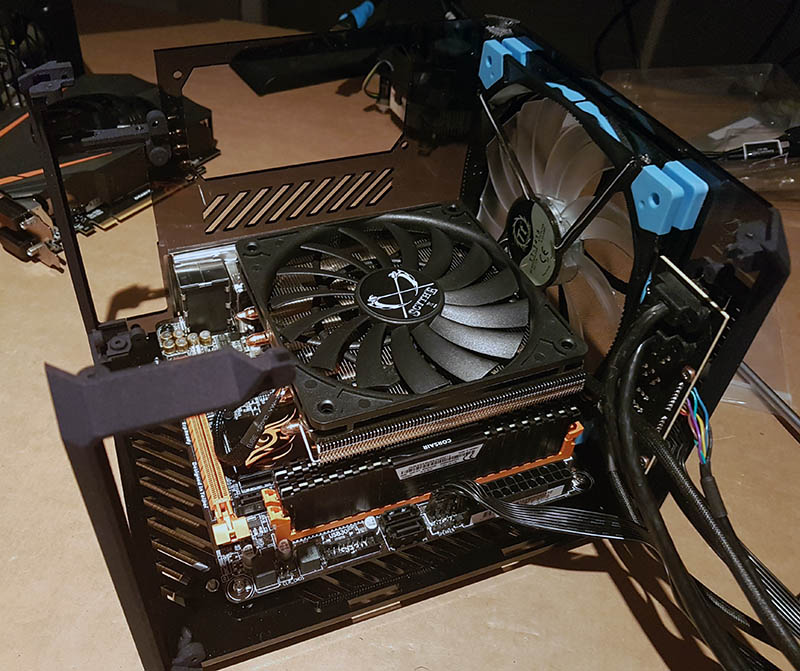 One of the reasons I wanted to test this cooler was due to the unique way that the heatsink is lifted off the motherboard by the heatpipes leaving a large gap under the cooler, this is great for the LZ7 in particular because the airflow from the side fan can pass right to other side of the board without being obstructed by the CPU cooler block: 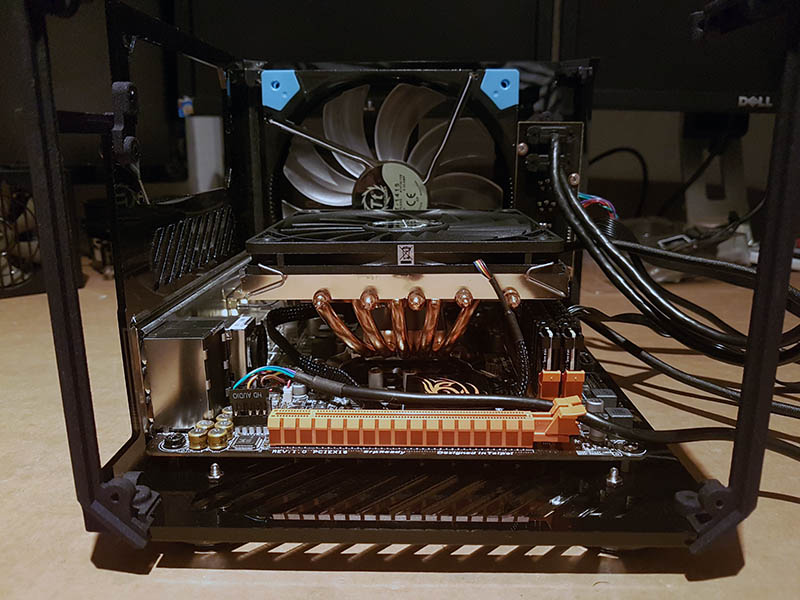 When the SFX power supply is fitted there is about a 10mm gap between the Shuriken fan and the underside of the PSU, although it is worth noting that the PSU only sits above half of the CPU fan, the side intake fan also helps with CPU cooling by pushing cool air into the cooler fan. 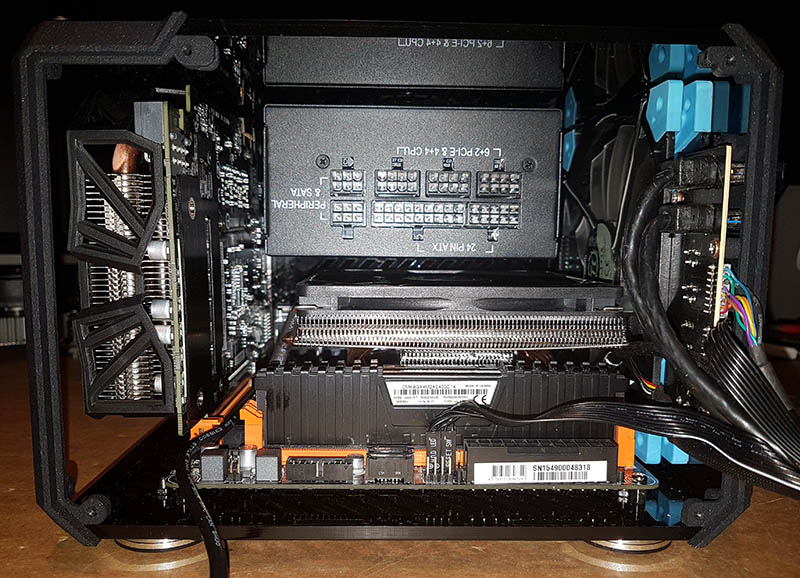 The case was tested fully assembled with dust filters on both the intake fan and GPU side panels, ambient room temperature was 22C. The system was stressed using Prime95 for 3 CPU cores, the 4th core was then left free to run Unigine Valley to fully stress the GPU, resulting in 100% usage of CPU and GPU. The system was left to run for 2 hours and results were recorded at the end of the test.

TEST RESULTS
The Big Shuriken 2 is a quiet cooler, but I wouldn’t say that it is as quiet as the Noctua NH-L9i at idle speed, you can faintly hear the fan when you put your ear close to the case, whereas the Noctua is inaudible at idle.

Another issue I came across was that the Scythe fan wasn’t reporting its RPM to the motherboard software, showing as 0rpm. But the PWM was still working fine as I could hear the fan tone change when I manually adjusted the % control.

On the positive side, this cooler provides tonnes of CPU cooling headroom, temperatures stayed exceptionally low during stress testing meaning the fan could be run at low speeds and still provide impressive temperature figures:

During the full system stress test the Big Shuriken 2 was the quietest active fan component, with the GPU being the most audible followed by the Thermaltake Luna 14 fan and then the Shuriken being barely audible.

CONCLUSION
Even though the Big Shuriken carries a premium price tag compared to other coolers of this class, the performance is definitely there to justify it. I would whole heartedly recommend this CPU cooler for use in the LZ7.

I would like to get hold of an Intel i7-6700k to see what this cooler is really capable of at higher TDP’s, I have a feeling it would handle it no problem.

My only criticism of the Big Shuriken 2 is that the Scythe Slim fan isn’t as quiet as some rivals, but if you were to upgrade the fan to a higher quality fan then it would be the ultimate silent sub 58mm cooler. Where are those 120mm slim fans Noctua!

FURTHER THOUGHTS ON GTX 1070 PERFORMANCE
It is worth noting that even though the GPU was the most audible component in the system I would not say that it was loud, just a low level hum and wooshing air noise.

The Gigabyte GTX 1070 targets a temperature of 83C and adjusts the fan speed to keep the card running under that temp, the GPU ended up sitting at 80C during the stress test with a respectable fan speed of 1513 RPM, the card also maintained a boost speed of at least 1797 MHz throughout the entire 2 hours of stress testing, sometimes going up to 1840 MHz.

The clock speed of the Founders Edition GTX 1070 is 1506Mhz with a boost of 1683MHz, so for the Gigabyte card to maintain a boost of 1797Mhz for 2 hours is very impressive for an ITX card with a single fan, and to do with a fan speed of 1513 RPM makes it even more impressive.