Time for some more photos, I’ve carried out some testing with the alternative side panels to see what difference there is with noise and cooling performance.

GPU SIDE PANEL
For the GPU side panel it was found that the slotted side vents contribute to fan noise and the GPU is noticeably quieter at the same RPMs with the open panel and a dust filter fitted as below, this configuration was used for testing: 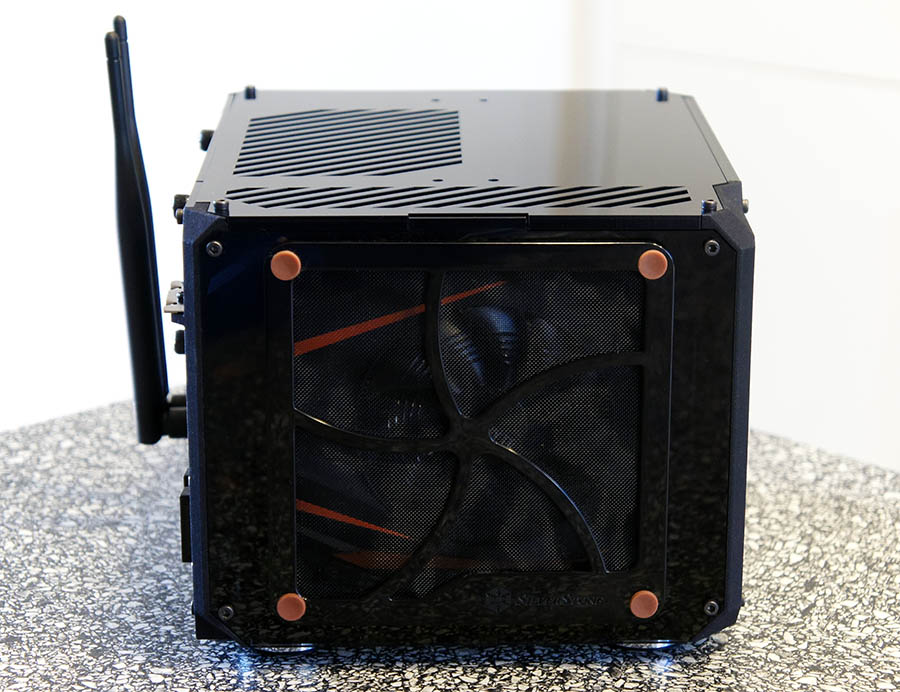 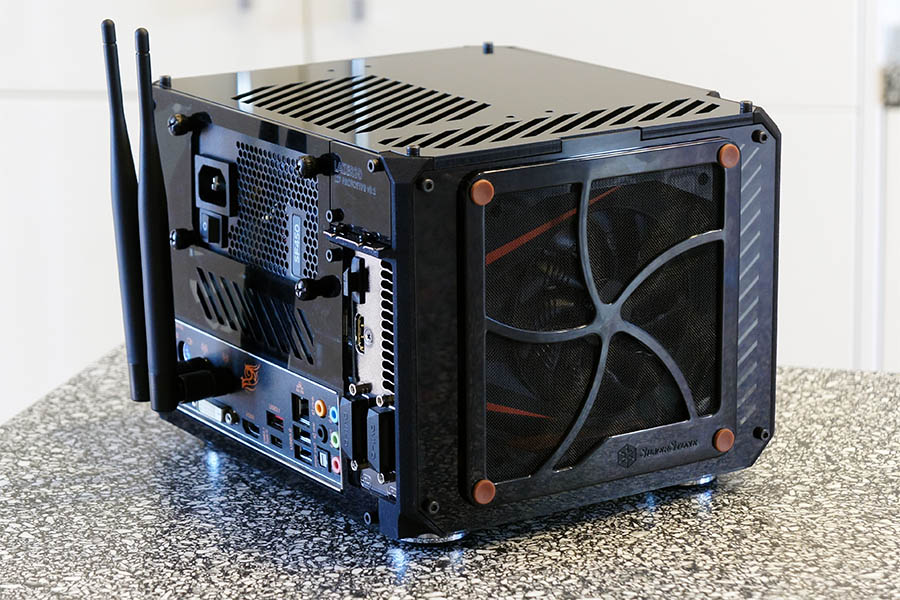 SYSTEM FAN PANEL
For the 140mm intake fan the quietest setup was found using the open panel with a fan guard fitted (see photo below), this configuration also offered by far the best airflow. Adding a dust filter instead does not increase noise by much, but airflow does reduce. In last place was the slotted design, this panel caused major fan turbulence dramatically increasing noise even at low RPM’s turning a silent fan into a noisy fan, I don’t think I will be offering the slotted vent design for the 140mm side panel!

Here is the configuration used for testing: 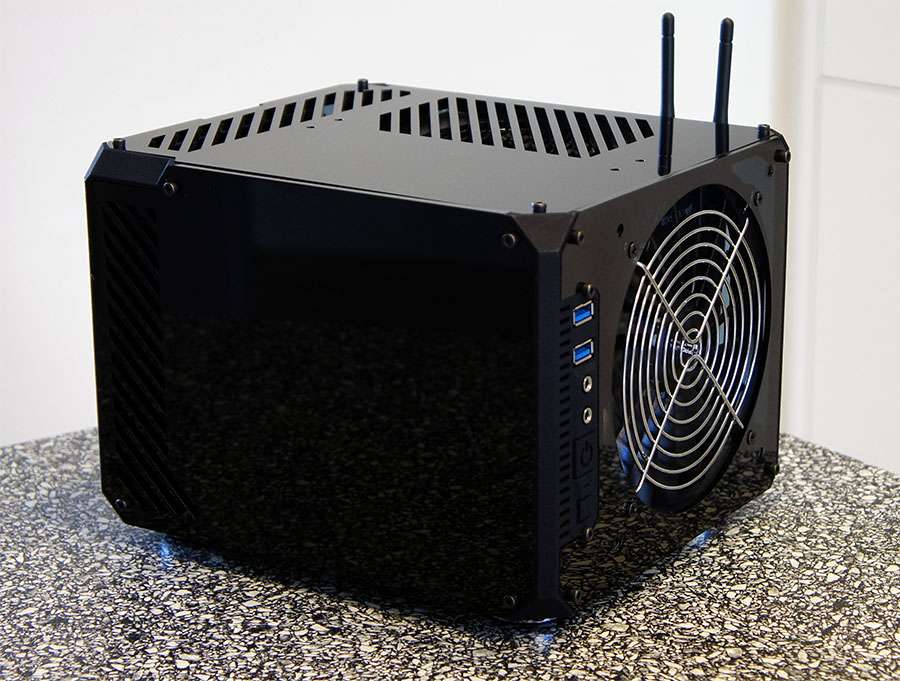 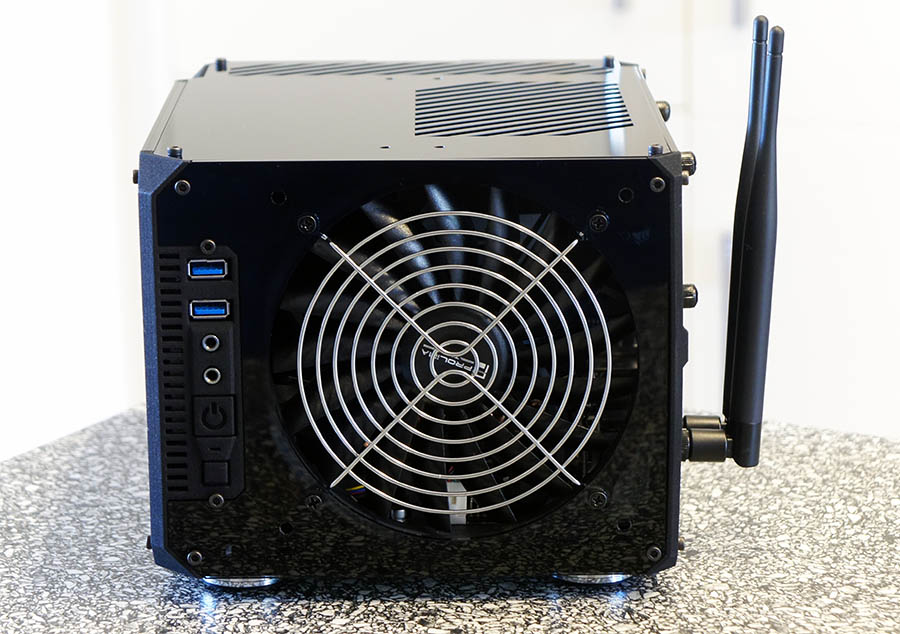 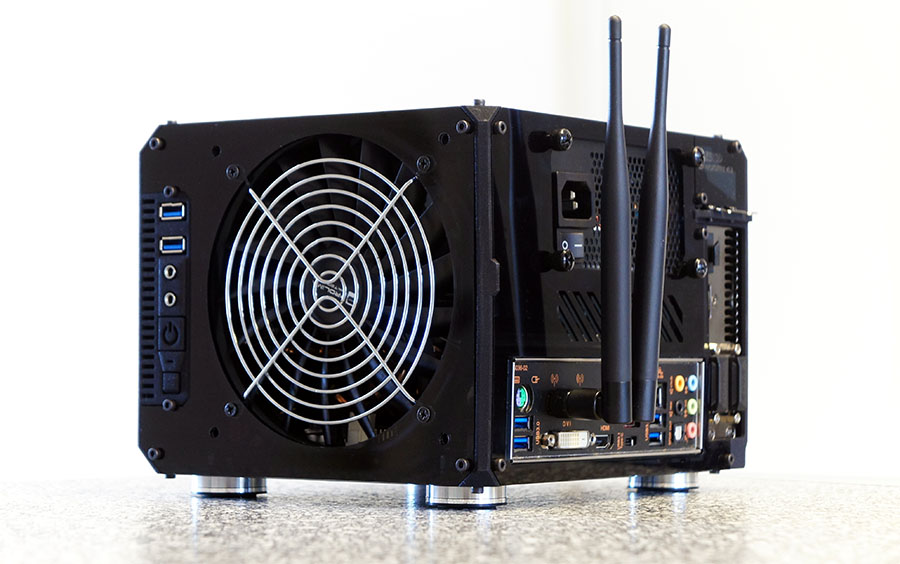 INTERNAL SETUP
When the front panel is removed you can see the Storage Drive mounting panel which slots into the base and is held in place by the corner joints: 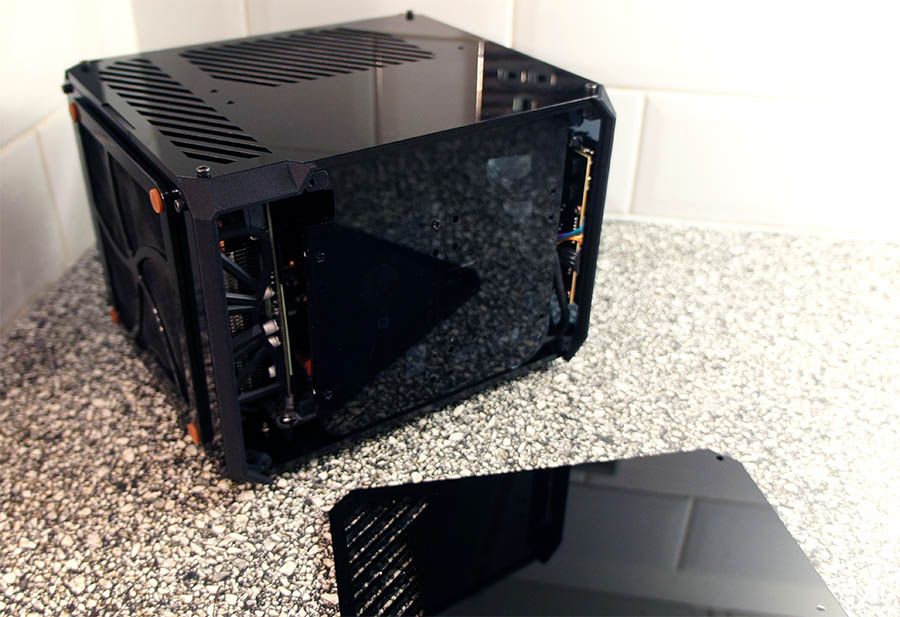 The mounting panel can fit 2x 2.5″ drives up to 15mm thick. There are 2 alternative hole positions for each drive to improve compatibility with some motherboards: 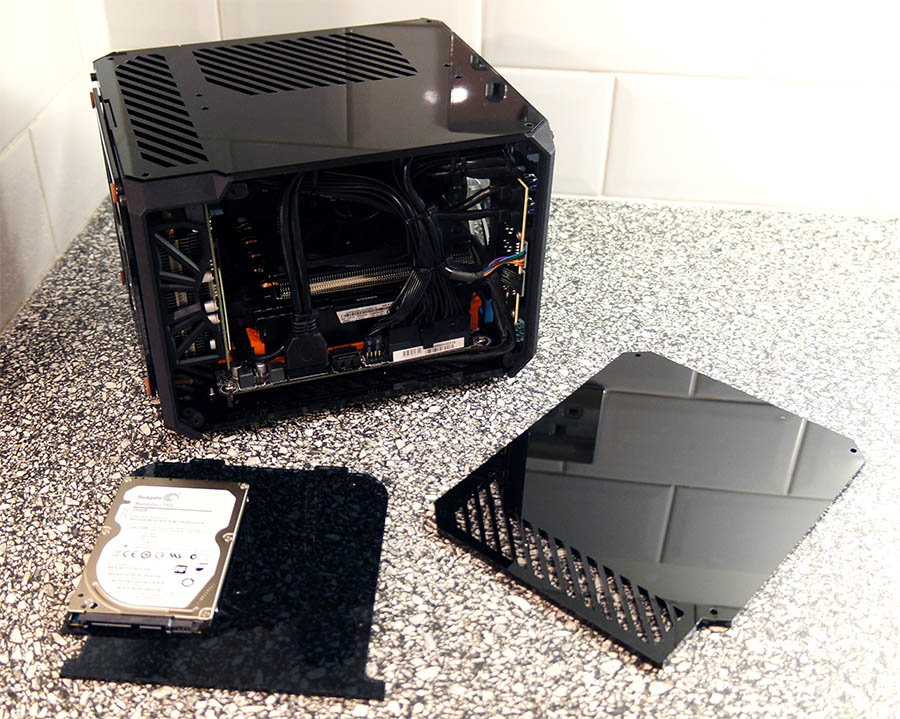 In front of the SFX PSU you can bundle up all the excess cabling leaving free space for airflow across the top of the motherboard and CPU cooler. In the photo below the the CPU has been fitted with the Scythe Big Shuriken 2, I found at idle RPM the Scythe fan was quite audible so I swapped it for one of THESE Akasa 120mm slim fans. The Akasa fan reduced idle noise to practically silent and actually improved the overall cooling performance as well: 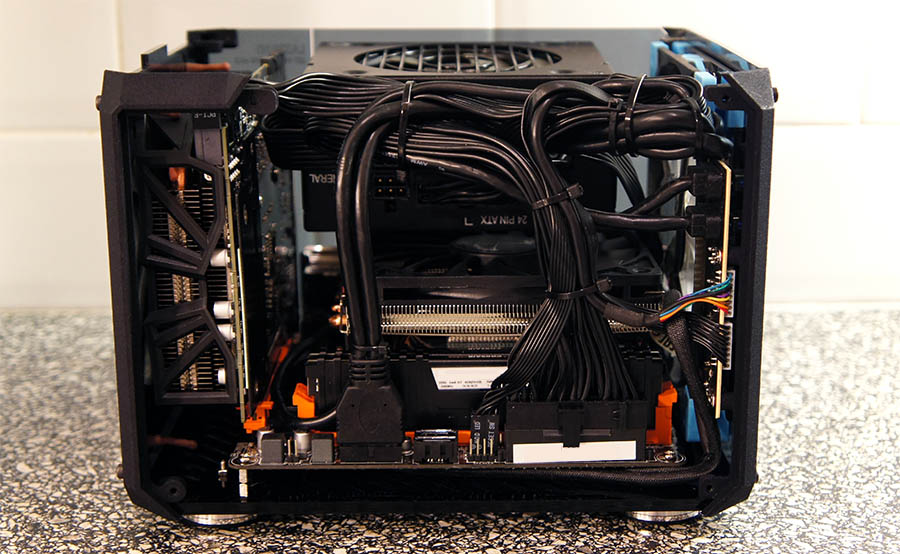 In the photo below you can see the alternative slotted vent 140mm side panel, this design also has a Vandall power switch fitted. Also shown with the Thermalright 140mm slim fan, this configuration was very noisy! 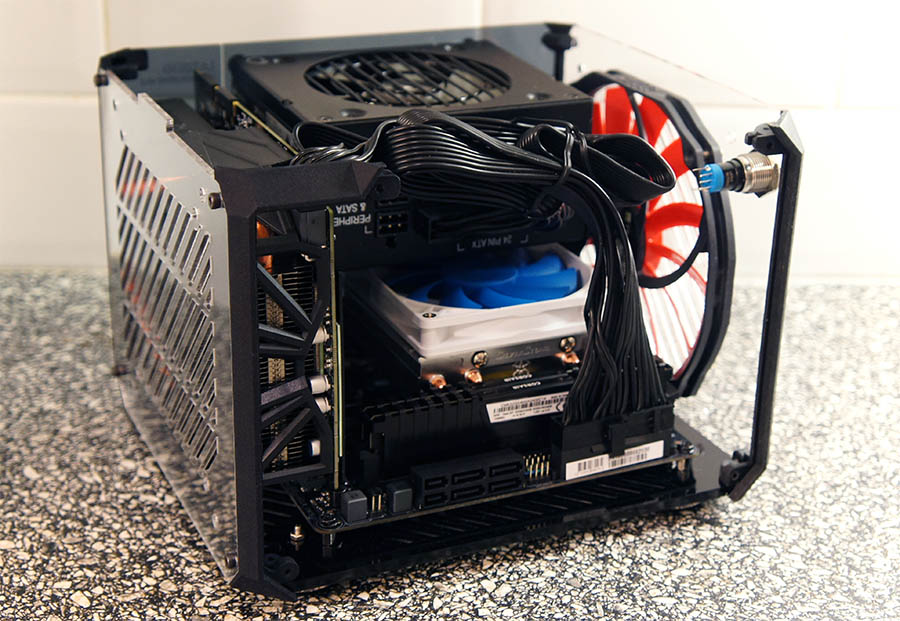 You may also see from the photo above that I’m using a different motherboard (Gigabyte Z170N) that I had temporary access to, it was fitted with an Intel i7-6700 and the Silverstone AR-06 cooler. The cooling performance was OK, but not great, the i7-6700 hit 80C during Prime95 8 thread stress testing with the AR-06 running above 90% PWM.

I have a feeling that the AR-06 was hindered by the underside of the SFX PSU starving it of cool air, a lower height cooler would likely perform better, such as the Cryorig C7 or Noctua NH-L9i. In comparison the Scythe Big Shuriken offers tonnes of cooling potential thanks to its 120mm fan that I think would work well with this 65W TDP i7, unfortunately I didn’t get chance to test this combination.

However, I found 2 downsides to the Raidmax case, firstly the GPU runs quite hot when loaded due to limited intake and lack of direct exhaust, but also the PSU is located in the front of the case with the exhaust being partially blocked/restricted, I found that after prolonged use the PSU got very warm with the fans ramping up to compensate.

The Raidmax Element case is 16 litres in volume, here is the LZ7 sat next to it measuring 7 Litres: 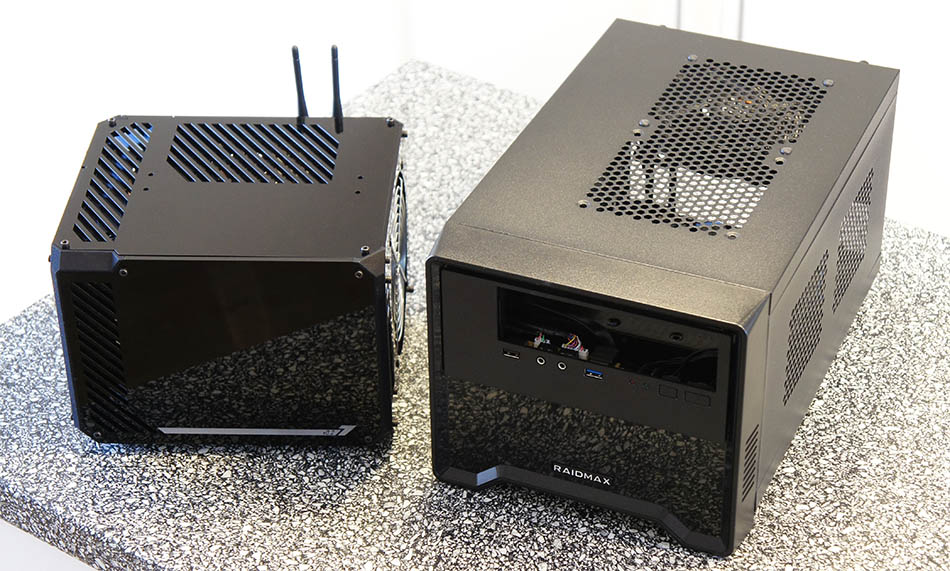 TRIPLE MONITOR SETUP
Excuse the poor photo taken on my phone in my dark basement, it’s not a great setup but I just wanted to test the the GTX 1070 card with a triple monitor setup: 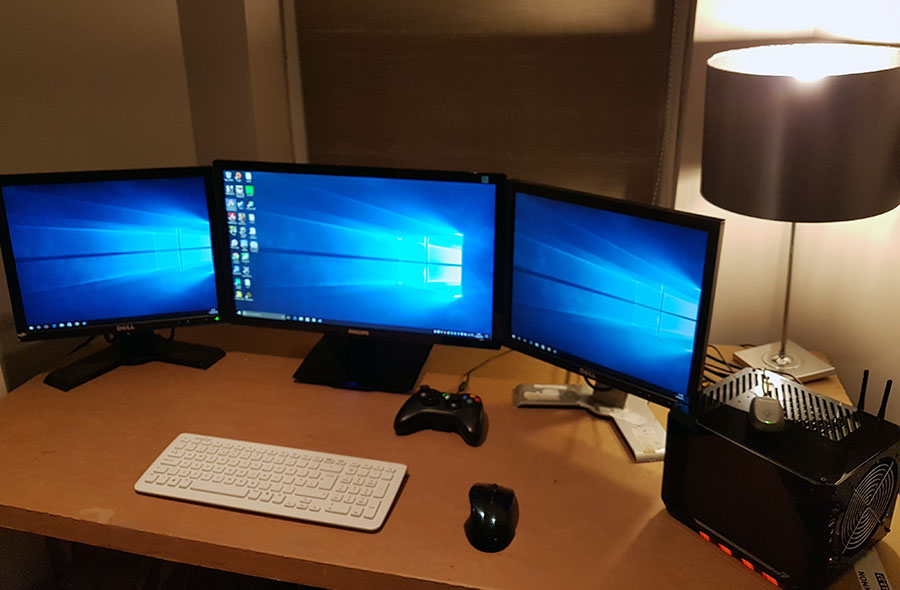 I’ve not had chance to test the setup with a game that makes use of the triple monitor yet, hoping to do so soon. But I did spend a few hours playing Star Citizen with my brother, the game was maxed out graphically and running at 1080p, when I checked the monitoring software I found the GPU was only running at about 45% usage. The system was running practically silent sat next to me on the desk, just a very low hum from the Prolimatech side fan.

FULL SYSTEM STRESS TESTING
Here are the results of full system stress testing with the above dicussed setup (metal grill over side fan and dust filter over GPU).

The first screenshot shows the temperatures and fan RPMs of the system in idle (click to enlarge photo): 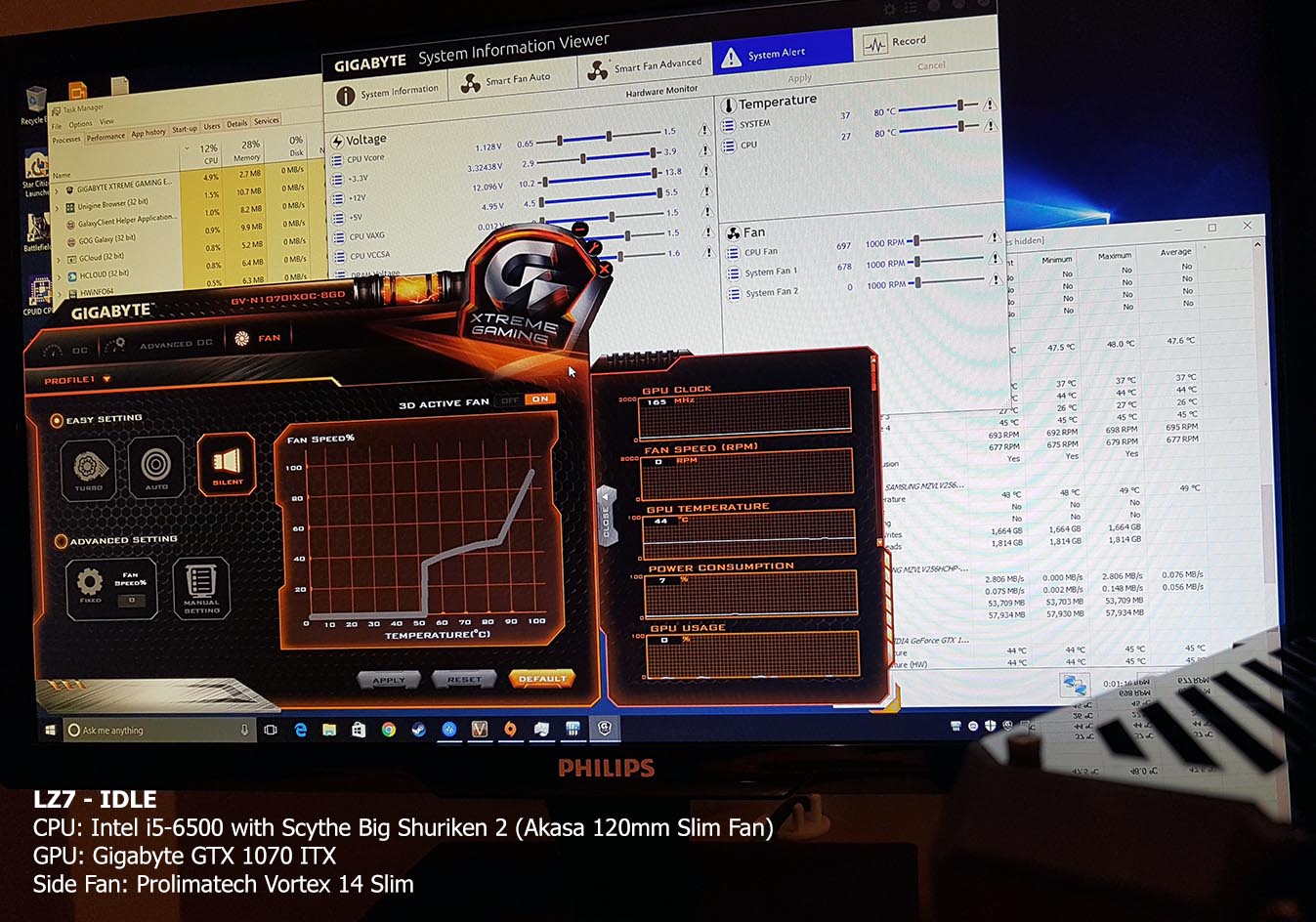 In the next screenshot the system was under full stress with the fan profiles set to quiet/silent: 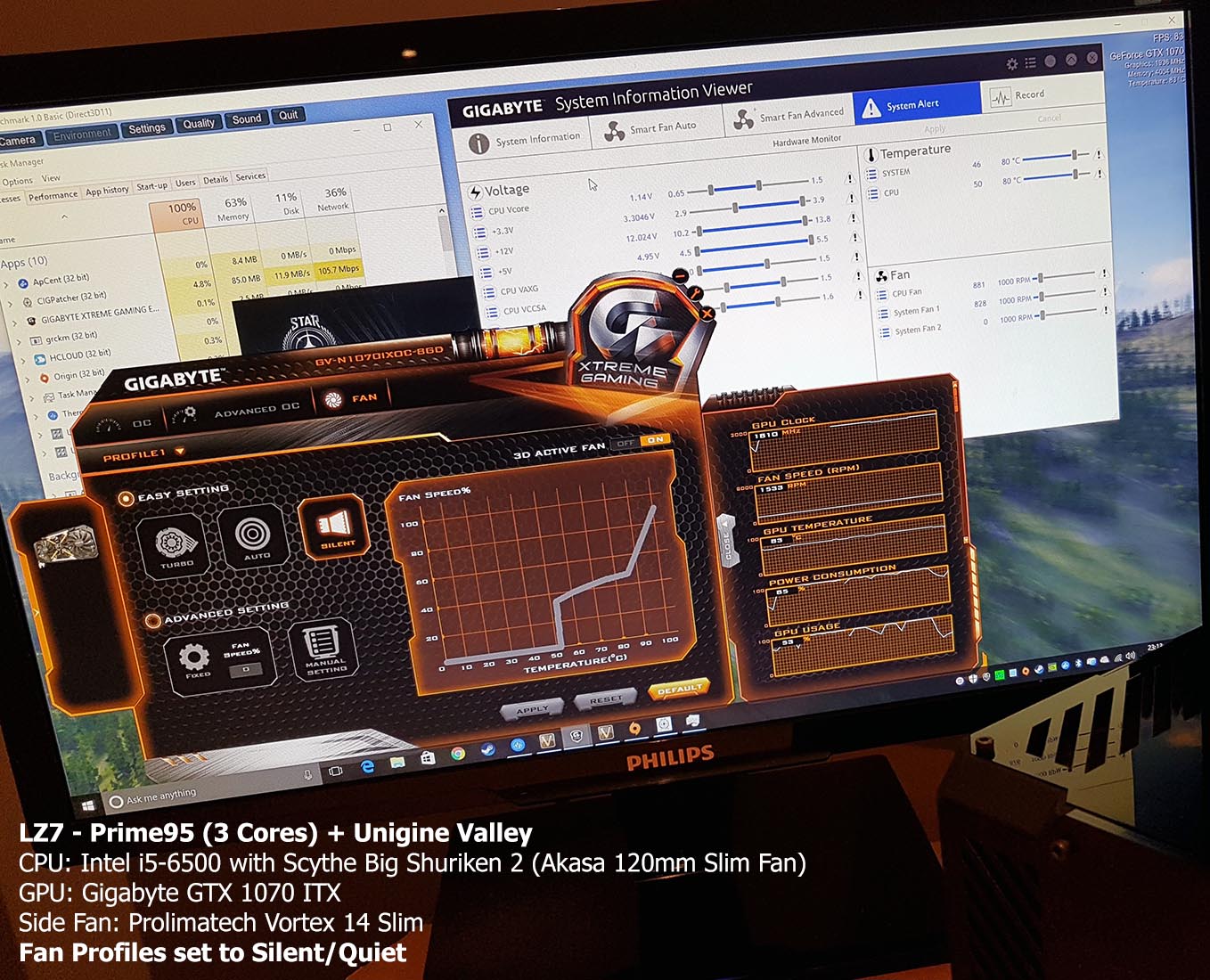 In the following test the fans were set to auto and standard profiles to provide much higher RPM cooling, I wanted to see what the system was capable of if you don’t mind a bit of extra fan noise: 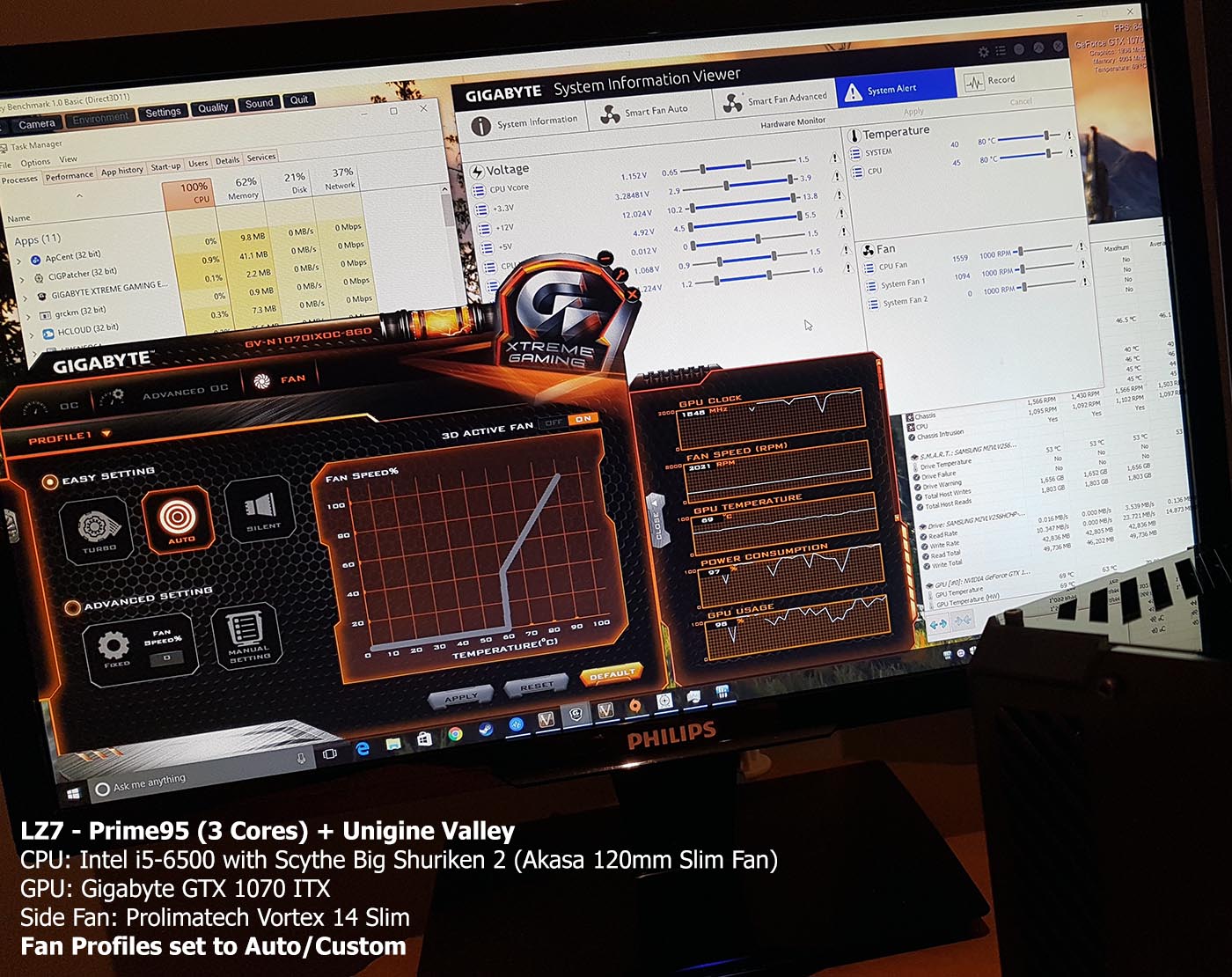 The Big Shuriken did an outstanding job of cooling the i5 CPU, maintaining a temperature of 50C with the fan spinning at only 900 RPM, when pushed up to 1550 RPM the Shuriken got that temp down to 45C with a fully loaded system.

GPU wise the Gigabyte card managed to maintain a boost clock of 1810 MHz with the fan spinning at a quiet 1530 RPM on the silent profile. When the fan profile was set to Auto the RPM increased to 2000 dropping the GPU temp down to 69C and pushing the boost clock up to 1848 MHz.

M.2 temperature performance wise, when the system was idle the drive was sitting at 48C, this rose to 56C when the system was fully stressed under low RPM fan settings. The drive temp dropped to 53C under the same stress settings when the fans were set to auto/standard.