You may be planning to build a new system inside the LZ7 and wondering which CPU cooler to pick, if you are looking for the best balance between low temperature and low noise then hopefully this article will help.

The LZ7 is capable of running cool and quiet when paired with a 65W TDP CPU and suitable cooling, this includes high performance desktop grade processors such as Intel’s Core i7-7700 and AMD’s Ryzen 1700, both extremely powerful and will provide high quality smooth AAA gaming for many years to come.

If you want to go for even more CPU power, the LZ7 can handle higher TDP processors such as the 91W TDP i7-7700K and even has a little headroom for some light overclocking, but bear in mind that the system won’t run as quietly.

65W TDP is the sweet spot for this case, so which coolers when paired with a processor in this category will give you the best balance of temperature and noise for a pleasant gaming experience? 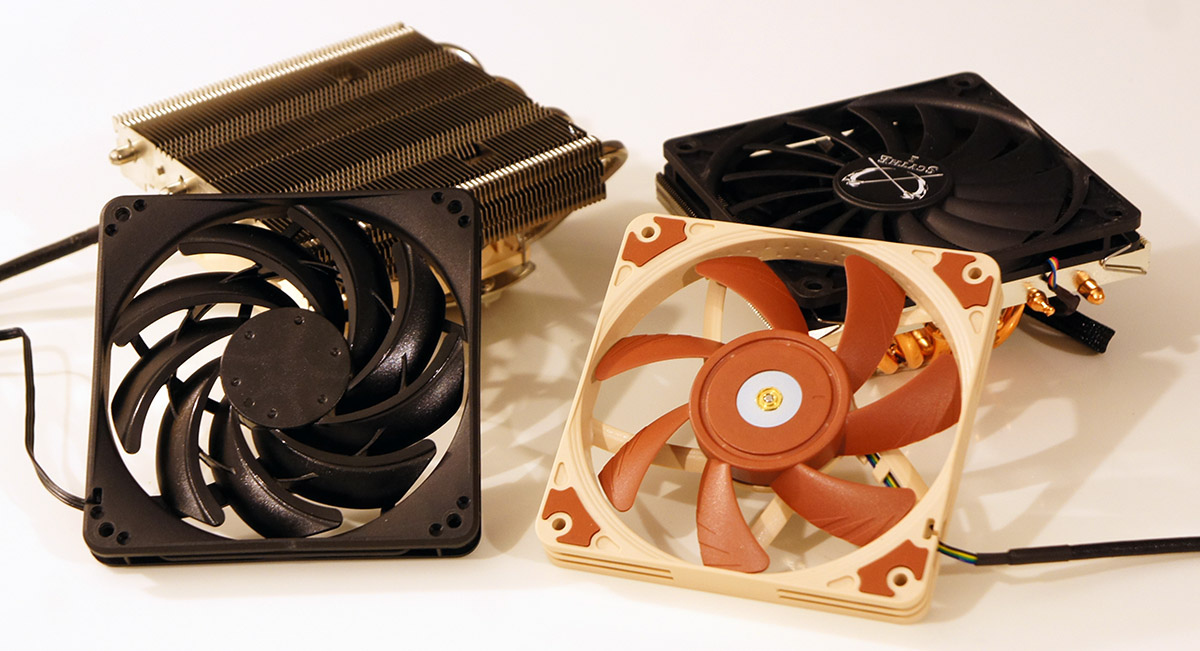 When using an SFX power supply the LZ7 has a maximum supported CPU cooler clearance of 67mm, this allows you to pick from quite a few different compact coolers.  I’ve picked what I think are 2 of the best <67mm CPU coolers on the market, I’m also throwing Noctua’s latest Slim 120mm fan into the mix to see if it can improve temperatures further.

The Noctua NH-L12 on the left and Scythe Big Shuriken 2 Rev.B on the right:

The Noctua NH-L12 comes with 2 fans out the box, a 120mm fan on the top and a 92mm fan underneath the heatsink.  The stock height of the cooler is 93mm, but if you remove the 120mm fan from the top the cooler reduces down to 66mm which makes it the perfect height for the LZ7.  Many reviews have shown that even with just the 92mm bottom fan this cooler is very capable and very quiet, as we have come to expect from Noctua products.

The NH-L12 can be purchased for around £44 in the UK, it comes with plenty of accessories including high performance Thermal Paste and fan resistor cables.  In bottom fan only configuration you even end up with a spare 120mm x 25mm fan to use in another build or future project.

Shown below the NH-L12 has around 3mm – 4mm clearance to the underside of the SFX power supply, but as the 92mm Noctua fan is mounted underneath the heatsink this small gap has minimal effect on its performance: 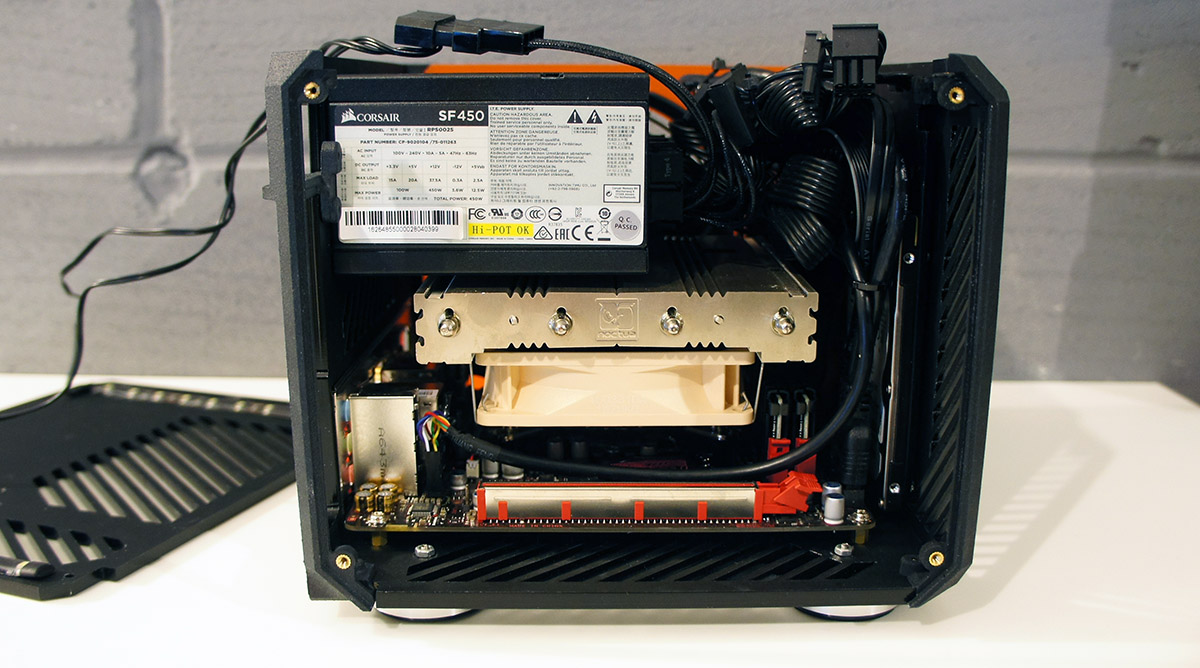 The Shuriken has quite a unique design, it measures just 58mm in height yet packs a 120mm down draft fan and 10 heat pipes.  The heatpipes form rings to support the large heatsink, also opening up a tall gap under the cooler allowing good airflow across and around the motherboard helping to keep overall system temps lower.

The Scythe Big Shuriken 2 can be bought for around £38 in the UK making it slightly cheaper than the NH-L12.  Shown below there is around 10mm clearance to the underside of the SFX power supply which sits over around half of the fan: 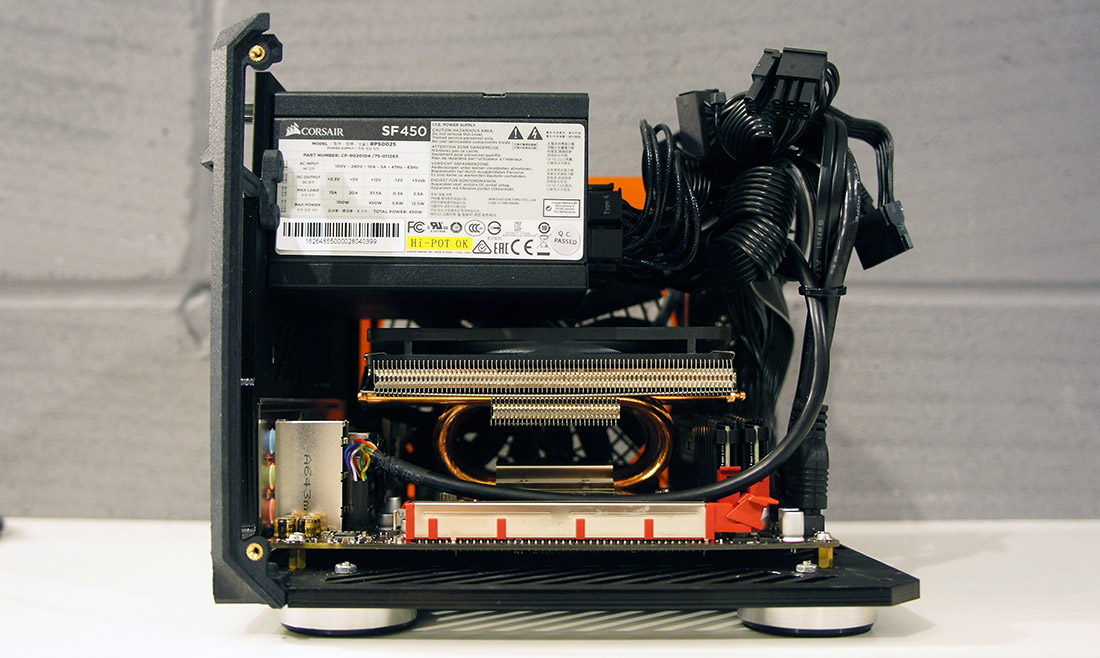 These highly anticipated slim fans from Noctua could be the answer to ultra-quiet cooling for SFF systems.  Could replacing the stock Scythe fan with one of these models create the ultimate low profile CPU cooler?

The Noctua A12x15-PWM fan can be purchased for around £17 in the UK, making the total cost for this fan + Big Shuriken 2 cooler combination around £55.  Mounting the Noctua Fan was a bit awkward as Scythe mounting brackets do not work with this fan, I ended up using zip ties which do a pretty good job of holding it down securely.

The Noctua A12x15-PWM fan is 15mm thick compared to the 12mm of the Scythe 120mm Slipstream fan that comes bundled with the Big Shuriken 2, this takes the total cooler height up to around 61mm and leaving around a 7mm to 8mm gap to the under side of the SFX power supply: 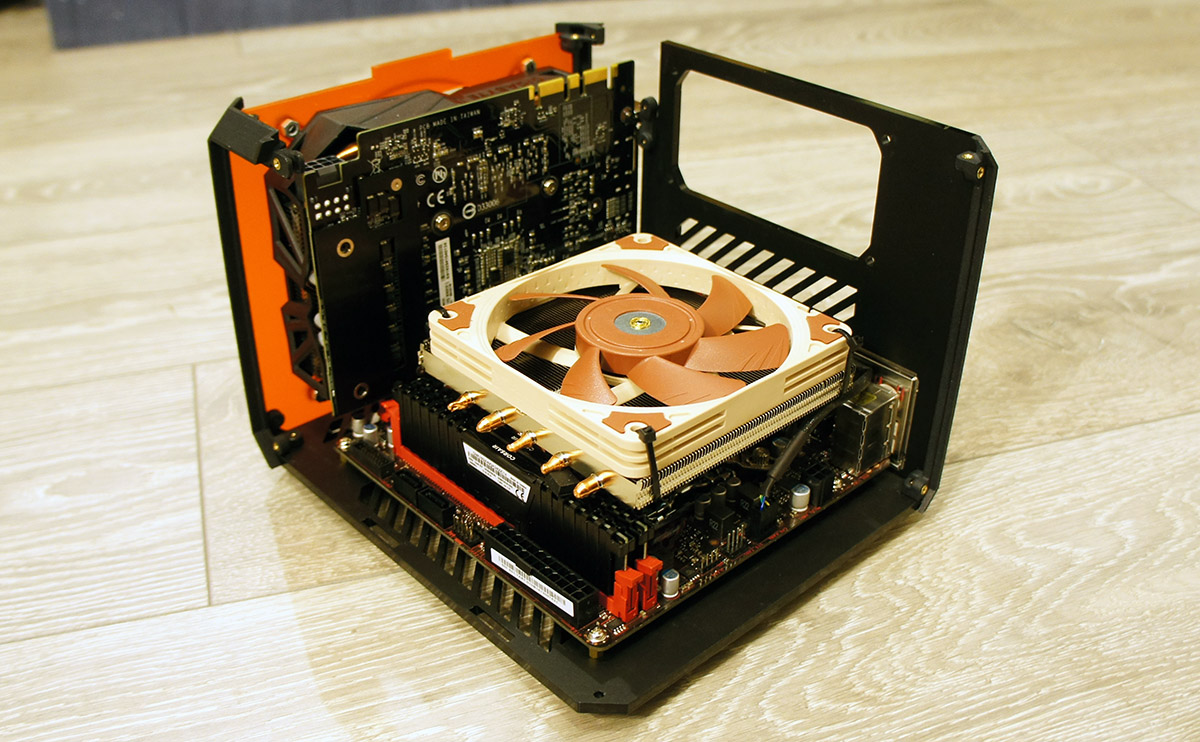 Each cooler setup was put through the same 3 tests each lasting 30 minutes to allow temperatures to settle:

Prime95 was run with 2 threads only to represent a more real world scenario, resulting in a steady CPU usage of around 55% which is close to a typical load for the i7-7700 while playing games.  Unigine Valley stresses the GPU to achieve maximum frame rate possible, this results in a GPU usage of around 99%.

To keep the testing fair the same fan profiles were used for each cooler setup.  For the CPU cooler the fan curve started at 0% at 0C, with a straight line up to 100% fan power at 80C. 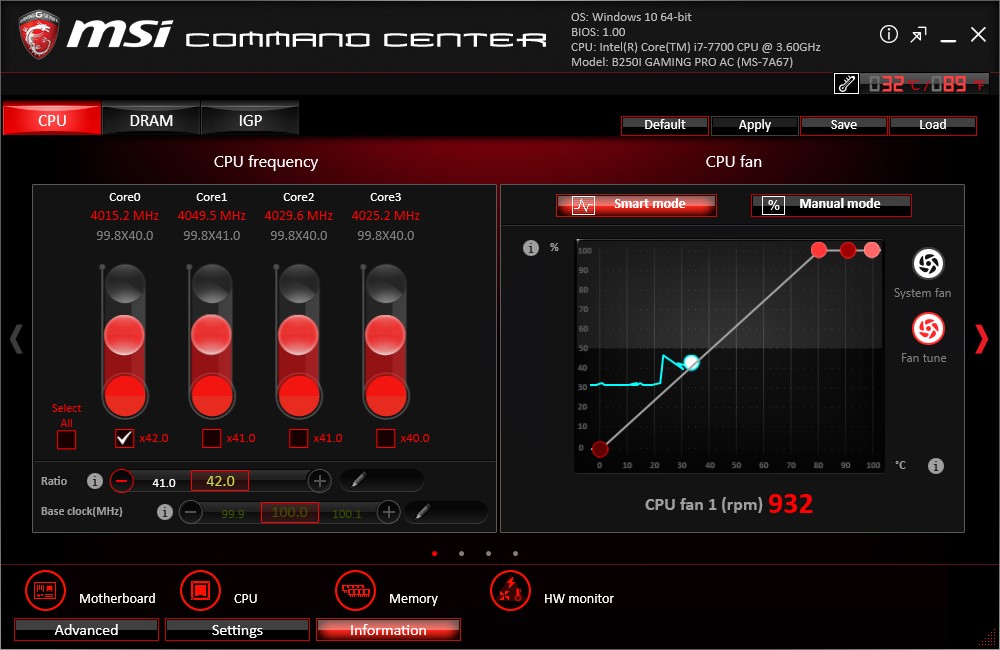 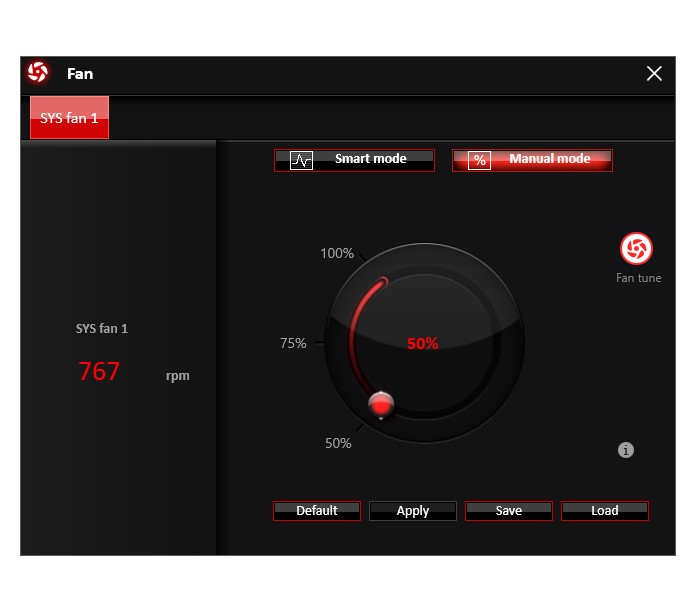 A brief overview of the temperature and noise results for the heavy load test with 100% system fan power can be seen below:

For more in depth results please see the table below:

When the system was idle the Prolimatech Ultra Sleek Vortex fan was the loudest component in the system for each setup, at 50% fan power this case fan can be heard as a low humming noise.  All the CPU coolers in this test were very quiet during idle and could not be heard over the case fan.

At 100% fan speed the Vortex fan becomes quite loud, in my opinion the few degrees lower temps are not worth the increased noise output, but the performance headroom is there if you need it.  I would recommend running the Prolimatech fan under 50% power as it still outputs a lot of airflow even at low RPM’s.

The Big Shuriken is more susceptible to fan turbulence noise caused by the case fan blowing sideways across it, compared to the NH-L12 where the 92mm is sheltered by the heatsink.  Lowering the case fan speed to less than 50% power would reduce overall system noise to much lower levels.

Swapping the Scythe 120mm Slipstream fan out for the Noctua A12x15-PWM slim fan gave a surprise result, the temps were actually slightly higher by around 2 – 3 degrees C.  I think this was due to 3 reasons, the first being that under the same fan power the Noctua spins slower creating less airflow, secondly the motor hub (central cylinder) on the Noctua is much larger which will create a bigger dead zone of zero airflow under the center of the fan, in other words the Noctua pushes air through less of the heatsink compared to the Scythe Slipstream fan.  The third reason is that the Noctua fan is thicker and sits closer to the underside of the SFX power supply.

Temperature performance is only half of the picture in a well balanced system.

Across all 3 cooler configurations the NH-L12 was the quietest during the high load testing when using the same fan power profiles.  The Scythe Big Shuriken with its stock fan becomes quite audible as the fan RPM’s increase, I would describe it as being quite loud above 50% fan power, the fan tone is also quite annoying with a medium/high pitch whining type noise.

Even though the stock Scythe Slipstream fan gets the lowest temps, it is achieved at the cost of much higher fan noise, not only in pure dB terms, but also its annoying fan tone.  Swapping it out to the Noctua A12x15 results in a much quieter/pleasent system as you would expect, all be it at the expense of a couple of degrees higher CPU temperature.

I think if you were to lower the fan curve a little for the Scythe Big Shuriken 2 + Noctua A12x15 combination, you could match the temperature results of the NH-L12 at a lower noise level.

The best performing cooler in terms of a balance between lowest noise and temperatures is the Scythe Big Shuriken 2 when paired with a Noctua A12x15-PWM.

Would I recommend this combination for all builds?  I don’t think so, the achieved result is only slightly better than the out of the box NH-L12 in bottom fan only configuration.  Whether the extra expense and hassle of adding a Noctua A12x15 slim fan to the Shuriken is worth it for a couple of degrees lower temperature is down to your own build priorities.

The Scythe Big Shuriken 2 is a noisy cooler in its stock configuration due to the included Scythe 120mm slipstream fan, I would not recommend this cooler if silence is your priority unless you swap out the fan.  For absolute lowest temps though, this cooler should be your first choice.

The Noctua NH-L12 in bottom fan only configuration is my top pick CPU cooler for the LZ7 case, it provides great out of the box performance with low temperature and noise levels, making it an ideal match for any 65W TDP CPU.

Thanks for reading and let me know what you think in the comments below.